It's Not Art and It's Not Fair:

The first thing I noticed was the bums. All of the sudden on Monday there
were these guys asking "Say, boss, can I have a dollar?" and "Where's the
store?" ("Where's the Store?" What store?). The worst part was that these
aren't the bums I'm used to...It's not the lady with all of the bags and
winter coats, it's not the guy with the stick covered in duct tape, it's not
the lady on State Street who talks really quiet...These are all new bums!
Even the hobos know to skip town during Art Fair, unlike me who sticks
around year after year. 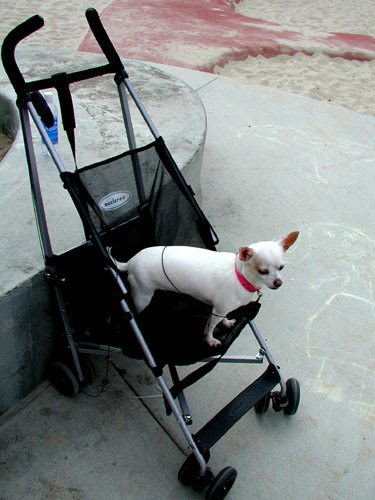 Thing #1: Strollers and Dogs. The kids don't want to be there, dogs don't
want to be there, I don't want any of them there. It is too hot, it is too
crowded, and dogs want to smell everything. I remember a childhood friend
hating the Art Fair because she always got hit in the head with purses and
could only see the backs of peoples knees. I can't imagine a worse
experience than dragging a bored kid through the hot crowded streets with
them mewling about needing to pee and wanting an elephant ear...except for
maybe actually being that kid. Don't even get me started on strollers, all
I'll say is that I'm buying a pair of Fila soccer shin guards for next year.

Thing #2: The "Art Fair Walk" There is something infuriating to me about
that half-speed shuffle we are all forced to do as we walk the streets,
glancing furtively from side to side at the art, hoping that we won't crash
into the fanny pack in front of us, afraid of "crossing the stream" on the
left side of the street since we've been actively cursing everyone who does
like a longshoreman with Tourette's Syndrome. That infuriating pace reminds
me of being a kid and trying to put together model cars: my hands would get
so tense from trying to do the minute gluings and placing on the intricate
decals that they would literally ache out of frustration. My legs do the
same thing and I have to bust out onto a side street doing a kind of John
Cleese "Ministry of Silly Walks" thing until they feel normal again.

Thing #3: Art On A Stick. A lot has been said about art on a stick, and I
don't feel the need to elaborate too much further, but one thing does come
to mind: the Need Factor. People walk around all day looking at ten thousand
dollar sculptures and spending their money on nine dollar bratwursts and six
dollar lemonades. At the end of the day, sunburned and bitchy, they see a
twelve dollar dragonfly on a copper stick and they think "well, at least
it's only 12 bucks, and I still have to pay that guy whose lawn I'm parked
on...maybe I'll jam it in the ground outside my condo if the neighborhood
committee says it's ok..." Ladies and gentlemen, another satisfied customer.

Thing #4: The "El Condor Pasa" Peruvian Flute Fiasco Troupe. Another Art Fair staple.
Jason Buchanan stated that he thought it was ironic that the only song he could
ever pick out was "The Sound of Silence"-- and could these guys look less interested
in what they are doing? The robots at Chuck E. Cheese's have more personality
than these poor saps, who I'm sure truck themselves all over the country
all summer following one ethnic folk festival with another street
art fair from May until October. I'd actually like to hang out with these
dudes after work and listen to them play the stuff they want to play, I'll
bet Simon and Garfunkel songs are not the pinnacle of their musical
exploration...I'll bet when they get back to the hotel or RV or whatever,
these guys really wail on some freaked out jams.
Serious.

Thing #5: Vendors Selling Their Crap On The Streets. As someone who used to
do this, I can tell you it is a drag. Haul all of the junk that won't sell
inside your store out onto the sidewalk, mark it down (or Up in most cases)
and try to foist it off on the unsuspecting public. For shame. Those dusty
shampoo bottles that nobody wanted last year are goin' nowhere, pal. Same
goes for local restaurants...if I'm not going to pay five dollars for a
slice of pizza in a regular week, I'm certainly not going to pay eight bucks
at Art Fair. The only store exempt from this is Footprints, since they
actually put good stuff on sale and I like the guy who runs the place.


* The weird RV city that springs up in the Library parking lot.

* Tan guys with ponytails and Hawaiian shirts (aka "Croakies").

* The people at the information booth who don't really have any
information.

* Trying to get anywhere in a car is completely out of the question.

* Mr. B being hailed as a genius. He's good, don't get
me wrong, but I can't picture him as the high point
of Boogie-Woogie evolution.

* The food smell on Liberty and near the Union which
lingers for months.

* The terrifying political infighting between the
merchants and the three or four different Art Fairs.
Ask Paul if you really wanna know.

* The fact that people get so oblivious that they need
signs saying "Look Out Dummy, You're About To Walk
Out Into Traffic And The Cars Won't Stop If They Have
The Green Light!" at every intersection.

* The fact that businesses need signs on the bathrooms saying that the
restrooms are for employees only, and that people are so desperate
to avoid those vile Porta-Potties that they'll wander up five floors
of an office building to use the terlet.

* Those Greenpeace people every six feet with their little
clipboards..."Do you have a minute for Greenpeace?" "No, I now have
nothing but hatred for Greenpeace, thank you very much."

* People who stop walking right in front of you.

* Photos of empty doorways and boats are not inherently interesting, but
I swear there is a whole booth full of them every twelve feet.

* You always end up touching some incredibly sweaty person.

Ok, Ok...Things that are good:

* Those six dollar lemonades. Man oh man, I usually drink about ten of
those.

* You usually get to see The Chenille Sisters for free.

* The Motawi Tile booth (who knew we had a world renowned Arts and
Crafts tile company right here in town?)

* Lotsa freaky people to see...My dad had a friend who used to dress up
in this whole sparkly green outfit with wings and she would walk
around as The Art Fairy touching kids on the head with her magic wand
and peering through these crazy handheld glasses.

* Seeing the footage from the Channel 9 public access camera on TV in
February.

* You usually run into old friends that you haven't seen 'cause they
moved outta town and only come back to the area for Art Fair.

* I probably shouldn't mention anything, but Dominick's is like a ghost
town during Art Fair. I think people think it's going to be really
busy, so they stay away...Like Yogi Berra said: "Nobody goes there
anymore, it's too crowded."

* Bearded guys who juggle for a living are the new Cowboys Of The Old West.

* It always rains, at least one day. I love to watch everybody scramble
under cover, and see the different ways the artists have devised
to keep the rain off of their stuff. It usually cools it off too.

* Joachim Knill is a photographer with a booth on South
University and he does these crazy close-up photos of
frogs looking at grapefruits that look like UFOs...
they're cool.

* Ralph Davis is an Ann Arbor painter with a booth
Main Street who does these amazing geometric
landscapes. Quite nice.

* The fact that Ann Arbor is about the only place on
Earth where the Michigan Gun Owners coalition can
set up an information booth right next to the
Sierra Club's booth.

* Shakey Jake seems to dig it, and whatever's cool with
Jake is cool with me...he's got a much bigger claim
on this town than I do.