Be on the lookout for The Ann Arbor Flasher.
It actually says in the report "Police said Wednesday the man has grossed out three young women."

looks like I gotta lay low for a while... 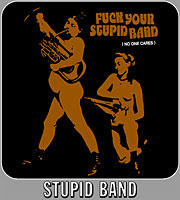 I dunno a whole lot about classical music, but Maeve and I think this t-shirt has a picture of a guy playing the tuba and a woman blowing a bellows up his butt.
and on the site instead of "thumbnails" they call their smaller images "Dicknails"...priceless.


Some mild mannered perverts have some kinda Headphone Fetish.
Luckily, this website can provide them with hundreds of photos of fully clothed women in headphones, including a key to see what brand of headphones the chicks are listening to.


The Dave Matthews Band bus dumped 800 pounds of liquid sewage onto passengers in a tour boat in the Chicago River.
Steve says "Don't drink the water"


Local yokel Jesse Popp says something funny in The Onion.

Penny was right, this was Yahoo's most popular picture of the day

Now there's a girl who recognizes the inherent interest in two sandy women rolling around on top of each other.


Thanks David
Thanks Dadid
Thanks Steve
Thanks Rob
Good call PJ