Ain't-It-Chris-News sez:
"Hey bub. That weren't, technically, the Sin City trailer. The first bit with Josh
Whatshisname and the chick in red is based on one of Miller's short stories ("The
Customer Is Always Right" from the collection The Babe Wore Red) was test footage
that Robert Rodriguez created (completely on his own) to sell Frank Miller on the
concept - which obviously worked (Frank had been pretty burned by his Robocop
experiences and wasn't keen to do any more movies). The Babe Wore Red won't be in
the final movie. The rest of the stuff was rough, unfinished footage that is currently
being filmed. He also showed all this at their comic con panel."

Truzzi put some work into speeding up the radware on the AllMusic site and actually sped it up quite a bit.
Noice!

Here are nine comments made by sports figures and NBC commentators
during the Summer Olympics which they might like to rephrase:

1. Weightlifting commentator: "This is Gregoriava from Bulgaria.
I saw her snatches this morning during her warm up and they were amazing."

2. Dressage commentator: "This is really a classy mare, and I speak from personal experience,
since my brother and I both mounted her mother."

3. Paul Hamm, Gymnast: "I owe a lot to my parents, especially my mother and father."

4. Boxing Analyst: "Sure there have been injuries, and even
some deaths in boxing, but none of them really all that serious."

5. Softball announcer: "If history repeats itself, I should
think we can expect to see the same thing again."

6. Basketball analyst: "He dribbles a lot and the opposition doesn't like it.
In fact, you can see it all over their faces."

7. At the rowing medal ceremony: "Ah, isn't that a nice touch,
the wife of the IOC president is hugging the cox of the British crew."

8. Soccer commentator: "Julian Dicks is everywhere!!!
It's like they've got eleven Dicks on the field!!"

9. Tennis commentator: "One of the reasons Andy is playing so well is that,
before the final round, his girl unpacks his balls and kisses them...
... Oh God, did I just say that?"


Have you reeeeealy enjoyed a movie?
Not until you've run it through the Mr. T Chain Scale.
Think of a movie, answer a few biting questions, and see how many chains Mr. T would wear around his neck to the premiere.

Phil Spector out on One Million Dollars bail. 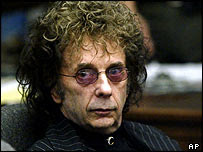 
James Guthrie is now in possession of Pink Floyd analogue masters for Wish You Were Here and Animals. We're talking 5.1 hi-rez mixes for SA-CD here folks.


Thanks David
Thanks Matt
Thanks Greg
Thanks Earl