I consider myself a pretty big skeptic when it comes to Brian Wilson's "Post-Sanity" musical output, but I got to hear SMiLE today and it is really really well done. 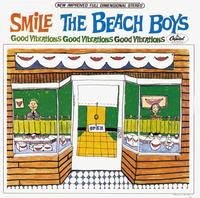 From what I've heard on the compilations and mock-ups that John Bush has put together in the past, the music is very faithful to the original recordings, and since Wilson has always surrounded himself with a spectacular (and Beach-Boys-y) backing band, it sounds even better than the bootlegs I've heard.

Brian Wilson still has a little of that Carl-from-Caddyshack-lazy-lipped-"What an incredible Cinderella story"-slur to his vocals, but they're supported by such spectacular harmonies and broad instrumentation that you don't really notice it. Comes with a cool booklet and the usual Nonesuch slipcover. I'll buy one.
It makes me happy.


So, this is sort of strange: the guys who put together Homestarrunner are doing these weird little online commercials for a retaurant chan called Mellow Mushroom. Apparently they're putting one of these Restaurants in Ann Arbor.
The Toons are just like Homestarrunner except not funny.


Find out What Song was #1 On Your Birthday Actually, anyone who filmed in "BosomMania" is a personal hero of mine.


Speaking of Boobs, PJ and I did a very formal statistically accurate survey on our way down to Tennessee, counting the number of Kerry/Edwards bumper stickers vs. Bush/Cheney bumper stickers on cars on the highway:


Find out What Simpsons Character You Are.
I'm Marge, Dadid is Lisa. The Donk is Homer...go figger. assault with a deadly bosom!

Thanks Paul
Thanks David
Thanks Dan
Thanks Dadid