CHRIST! Rob said something funny today and I said "I gotta remember that"

Letters from children to Christopher Walken 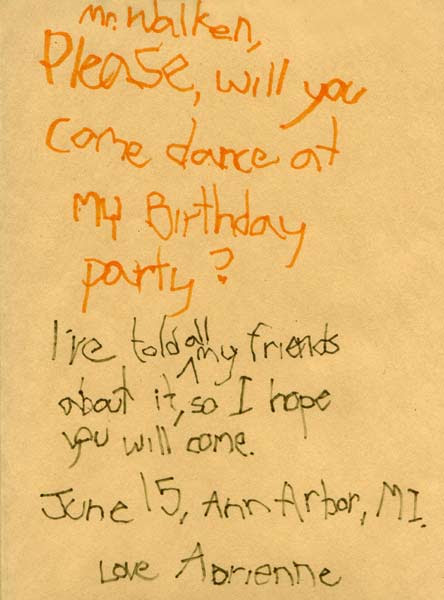 Christ what a pain...I've gotta hack into the registry instead of just adjusting a setting?
Hmmmm....Windows operating system, Windows Media Player...Not a monopoly....Moving on...


The 100 oldest web domains.
Ah to go back to 15-Mar-1985 and capture the domain of Symbolics.com...Just look where they are today!


Gerard re-posted some of his horribly Engrished Kenyan Bootleg DVDs.
Some of the scans are lost to the ages, but I recommend Crouching Tiger Hidden Dragon (complete with guns and misspellings), Full Metal Jacket 2 (some kind of video "mash-up" of a John Ritter movie and Pauly Shore's "In the Army Now") and If These Walls Could Talk 2 (complete with the tagline "Women Love Woman" and then a picture of a guy on the cover).

Aw Christ, they're all good. Look at 'em all , and Weep. Weep my children, because the "102 Dalmations" cover with Glenn Close as Cruella DeVille holding two sawed-off shotguns is no longer available...


Hey! Here's a funny movie by Matt Tobey where he impersonates Baby Jessica stuck in the well and Bill Cosby trying to shill Jell-o pudding, all acted out by cologne bottles (Bill Cosby's the black one...maybe Drakkar?).
If you don't like it, look what these toothless fucks are saying!


I just got my new Esquire, and as much as I wanted this photo to be in there, it weren't.
Where is it from? and how can I get a Farrah Fawcett-sized poster for the cigar room? I'm a simple man...just give me everything that I want.

Actually from 1985 (note the Windows 1.0 box next to the Mac in the second picture), and not for Teen Beat, but that's a better story anyways...


Thanks Gerard
Thanks Dan
Thanks Rob
Thanks Matt