An alliance announced today between MSN Music and Smithsonian Folkways Recordings will make tens of thousands of historic songs from legendary performers of folk, blues, jazz and world music available online for the first time, allowing music fans to discover a diverse world of music and sound. The Smithsonian Folkways catalog of nearly 35,000 tracks, which is only available for download through MSN Music in the United States, features legendary artists Woody Guthrie, Pete Seeger, Lucinda Williams, Big Bill Broonzy, Lightnin' Hopkins, Ella Jenkins and more. The archive also features nonmusical tracks including speeches, poetry and natural sounds from around the world.


Click Here for The Hasselhoffian Recursion!!!
If you stare too long into the abyss, the abyss with begin to stare back at you...


Darth Tater
Thanks to everybody who sent this to me.


Pretty enjoyable movie where a guy snorts an entire kitten up his nose.
I'm pretty sure it's fake, what with computers and all.

One of these things reportedly washed up on the shore after the tsunami. 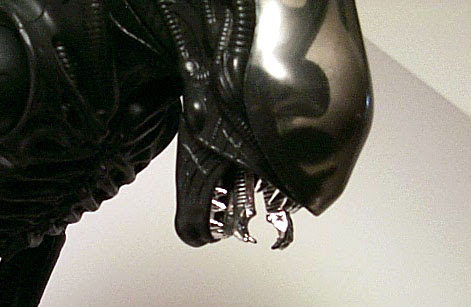 I'm not gonna tell you which one.


Speaking of garbage left behind after the tsunami,
look at these lazy fucks sunbathing as workers work around them.
I wish one of those alienfish would come up and bite these honkeys.


Speaking of garbage left behind after the tsunami, Courtney Love looks really weird...
...and kinda like an albino(?)


Are you like me and enjoy those magnetic ribbons that are stuck to the side of cars, but just haven't found the one that expresses your sentiments yet? This site has the ribbon for you:
Whether you feel like shouting "God Bless Jingoist Ribbons" or if you want to say "I Temporarily Support the Troops" or heck, if you just want a ribbon celebrating "Pre-Cooked Bacon" then PoMoSideshow has what you're looking for.