If you thought rock was old and tired and didn't involve nearly enough kitchen appliances or beards, then brother you hain't seen Hurra Torpedo yet. 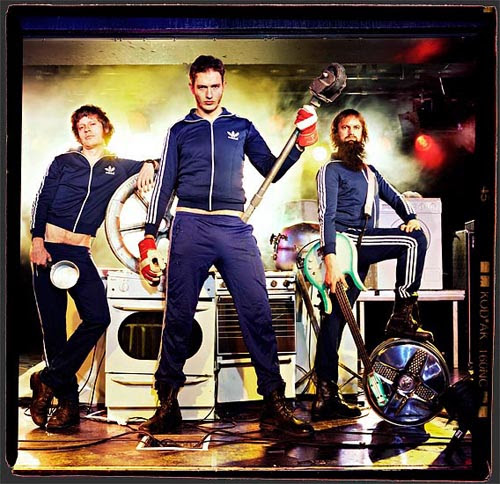 Terrific description of what makes them so great from Rev.Log:

And here is the video for them performing "Total Eclipse of the Heart by Bonnie Tyler on guitar, stove, and freezer.

I guess they were around in 1991(?) How come I didn't hear about them until today?

::
Much Like Martin Luther King, I Had A Dream
AMG had moved its offices into a big industrial building in Ypsi, kinda like a bank. My office was in the foyer. Christophe from the Hard Lessons was filling in for Mike Losey in Client Services and he came in and showed me this little movie one of our customers was interested in. It was a short cartoon featuring hamsters and chickens and it extolled the virtues of cloning. I thought the cartoon was funny so I told Dave Serra to sneak a copy of it so we could show it to Rob. Then it was lunchtime and so I got off the industrial Army cot that was in my office and got out my lunch. It was two crescent-shaped crusts of an English muffin with no honey.

It is nighttime and I'm waiting outside my apartment in Ypsi (right above the bank where I work which is AMG). A late-70s era white Cadillac bumps up on the curb next to me. The door opens and it is Rich Hansen who books for the Lager House and is also booking the Motor City Music Conference. He is speaking with an Australian acccent and has his hair done up in like a dirty blonde mullet, with some Keith Richardsian dreads and baubles hanging off to one side. There is a large PC computer disassembled and sitting on the floor of his car. He gets on his cell phone and calls up to my apartment to tell me that Porchsleeper has been booked to play right in the middle of Hip-Hop night at the Grande Ballroom. We wil be going on right before the headliner Yukmouth. he said it might sound crazy, but as long as we played a good 40 minute set of summertime pop, it would go over really well. Then he starts talking about moving to San Francisco.

I am at a bar on the night of our MC2 show. The lineup is some Jonathan Richman guy doing a Motown review, Loretta Lucas, Us, and The Great Lakes Myth Society. I see Ryan Sult and he looks realy confident, but weathered, like he'd been in the industry forever and seen it all. Big Matt and Mr. Gary are there too. They look excatly the same. Ryan motions me, Godfather-like, to the empty seen next to him and orders me a whiskey. I ask for a beer, but the waitress says all they have is whiskey. Then I'm sitting at a table with Greg Mcintosh and Johnny Loftus and I'm trying to tell them about this totally insane cloning movie that I watched that day. Johnny makes fun of me like I'm retarded.

Speaking of retarded, here are a bunch of people who are...challenged...singing the hit song "Simply the Best" in the middle of a football pitch.
I had to ask Maeve if some of them were English Pop Stars, or if they were all retarded.
I'm really into the scrawny guy who is third. He's got the moves.

Hoo boy, Matt Tobey's filthy mind makes me laugh.
That's not the Bush I was expecting.

Tribute to Jek Porkins.
"Without Porkins, the movie just wouldn't be worthwhile. I mean, this guy had flames on his helmet, and he even refused to wear his chin strap. Could he be much more of a bad ass?"

Thanks Jay-Rho
Thanks Steve
Thanks Horkulated
Thanks Matt
Thanks Donkers