The option is worth the action

Thanks to four of my bros who helped out in my time of need.
Number five: You're outta the will.

Funniest part of vacation:
We were in a restaurant getting ready to hit the Coral Castle ('member? from "In Search Of" and "Ripley's Believe It Or Not" where the one little guy somehow moved all of these millions of tons of coral rocks to build a crazy-ass castle? 'Member???) and we had this conversation:

PJ: "Do you think that guy built the bathrooms at Coral Castle too?"
ZJ: "Hmmm...I dunno."
PJ: "We should probably use the bathroom here then."

New Fiona Apple Album available to those in-house. Ask me where.

Huge thanks to my new enabler at JustJared.blogspot.com who has no affiliation with that guy from Subway.

Dear Jesus.
Sorry I haven’t been going to church for like 20 years. Glad to see you still love me.
-matt

Little Johnny attended a horse auction with his father. He watched as his father moved from horse to horse, running his hands up and down the horse's legs, rump, and chest.

After a few minutes, Johnny asked, "Dad, why are you doing that?"

His father replied, "Because when I'm buying horses, I have to make sure that they are healthy and in good shape before I buy."

I wonder what has been done to these bananas genes to force the store to call them curved yellow fruit.
Either way, I ain't eaten 'em.

Pretty funny site built by a guy who documents when his wife is mad at him.
October 31, 2004

Amy would prefer I not tell people that ask what my Halloween costume is that "I'm dressed as a guy with his wang out". Interesting side note - nearly everyone I've said that to proceeds to look down to see if said wang really is out. Morons.

Apparently almost any thought about Jenna and Barbara Bush are supposed to be kept to myself.

Unfortunately, here are some naked pictures of Sheryl Crow.
I kinda thought it would be...y'know...sexy to see her naked, but I was really really wrong. Although the headline is "She's got no Crowes on!" which makes me laugh.

on the other hand... 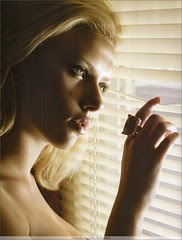 Pretty wild: You can type anything here and it pulls up an image for each letter.
The really neat thing is that it doesn't always pull up letters, sometimes it pulls up images that look like a letter...aw, you kinda gotta see it to get what I'm saying.