Pre-verts and fans of obsurdist comedy rejoice! Filthy Celebrity Imposter has been resurrected!
"As soon as I was free, I got right back into the swing of things and set my sites on humping the biggest celebrity in America: Terry Schiavo. I knew it'd be tough to get into the hospital with all the media coverage, so I dusted off my Mel Gibson disguise and strutted up to the place."

uhh...Note: If that paragraph offended you, you should probably not click the link. It gets way freakier after that.
::

And now the crafty scamp has slipped his paintings into four high-profile New York museums. 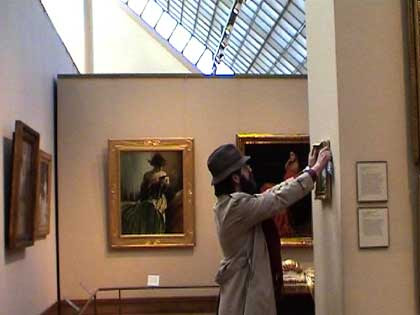 Much Like Martin Luther King, I Had A Dream

PJ and I were going to a college football game. I think it was U of M and somebody in Red and White (yes, yes, take my penis and lock it far away, I care nothing of football). Suddenly there was a whole bunch of gunfire and we had to run. I had a shotgun in my hand and my first thought was "What would Earl do?" (Earl is my stepdad: a keen assessor of tense situations who has gunpowder running through his veins) and I somehow know that the college campus' NRA office would be the safest place. The door to the NRA office was sort of like those revolving doors that they use in industrial darkrooms and labs with light sensitive material: All black and when you spin the thing around you end up in a totally light-proof place. Only this was even weirder: You entered on the regular ground level, and inside the entryway was spherical, (almost like the cockpit of the time-travelling spacecraft in Contact) and as it revolved you needed to crawl up and out of a small space near the top. There were many people who wanted to get in and they were rotating the door, so I really had to scramble to get my body out of this small opening before the door rotated and pinched me in two. As my body was halfway through, Donkers was there telling me I was doing it wrong (hmmmm...).

Finally I got into the NRA office and it was sort of like a Dean's office: Wood paneling, leather couches, a matronly librarian-type who wouldn't look up from her reading, a couple bored frat boys who were just killing time. I looked out the windows to see the entire campus running in every direction, escaping from gunfire, fires erupting in other buildings. Chris Woodstra was there, and maybe Dave Datta, and I know there was somebody else...Truman Capote or Alastair Cooke...some smart white guy...Suky Morita found a whole bunch of Security Tags hidden behind a desk and in the couch (Back when I worked at Tower Records, we would put these puffy plastic "security tags" on the CDs that we thought were most likely to be stolen. It didn't really stop people, because we would find them all over the place -- behind racks and in the magazines. It got to the point where we would just write in marker what the CD was that we tagged, so that when we found the tag later, we could take that disc out of inventory in the computer). These security tags had UPCs written on them in my handwriting.

There's a whole group of people who modify their walkmen for racing...
They use the motor that spins the tape as power, then race 'em.

Story about her album from Wired Here
"BigChampagne, which monitors songs available on file-sharing services, found that at any one time about 38,000 users in the United States are downloading songs from Extraordinary Machine."

This is sort of terrifying, but here is audio of Pat O'Brien attempting to talk dirty to some girl's answering machine.
There's a real "Swingers"-Jon-Favreau feel to it, as he just keeps going and going, hanging up, then re-thinking and leaving another message two seconds later.