"I DRIVE A DODGE STRATUS!"

n.
1: One who does not grasp the concept of caution.
2: One whose success is based purely off relentless aggression and pure luck.
3: One who likes chicken.
4: One whose battle cry consists of their own name.

v.
1: To destroy all hopes of success.
2: To rush headlong into danger without regard to consequences.
3: To satisfy one's own desires at the expense of all around oneself.

- I can't believe he just tried to headbutt that dragon. What a Leeroy.
- We were doing great until that idiot totally Leeroyed us.
- The party was really boring until Bob pulled a Leeroy.


Leeroy Jenkins, a character in World of Warcraft on the Laughing Skull server, was vaulted into international popularity by the underground circulation of a video featuring his clan at work. Leeroy 's guild, PALS FOR LIFE, was in the midst of conducting a raid on the Upper Blackrock Spire zone. In the video, Leeroy is shown returning from a long AFK and charging headlong into battle, completely in defiance of the battle plan his guild had been working on. Despite his being a level 60 Paladin, this move manages to get his whole party killed, as innumerable dragons surround and exterminate them. The video includes gratutious profanity on the part of his teammates, who understandably blame him for the debacle.

Comically offsetting his ham-handed actions, which led directly to the disgraceful slaughter of his entire group, Leeroy is shown with exhibiting machismo, screaming the war cry, "All right, let's do this! LEEEEEEEEEROYYYYYY JEEEEEEENKINS!" as he runs into the room. After being soundly criticised by his guildguys, he can only reply with this phrase: "At least I have chicken."

The video is here, and while it is large, it is both dorky and funny. 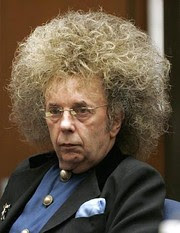 Phil Spector in court, obviously shooting for the insanity plea.


I once knew a blonde who:

1. Hates M&M's because they are so hard to peel.

3. Was trapped on an escalator for hours when the power went out.

4. Took her new scarf back to the store because it was too tight.

5. Couldn't learn to water ski because she couldn't find a lake with a slope.

6. When asked what the capital of California was; answered "C"

7. Got excited because she finished a jigsaw puzzle in 6 months and the box said "2 to 4 years"

8. Baked a turkey for 4 days because the instructions said 1 hour per pound and she weighed 96.

9. Can't work in a pharmacy because the bottles won't fit into the typewriter.

10. Can't make Kool-Aid because 8 cups of water won't fit into those little packets.

Speaking of both of those things, here's a site devoted entirely to women in Princess Leia metal bikinis at sci-fi conventions.
Hellloooo Eva.

Ladies & gentlemen: The Gallery of the Absurd brings you Gossip Fueled Art.
Marvel at the paintings of Nicole Richie and Lindsay Lohan as skeletons with skin!

"I DRIVE A DODGE STRATUS!"

FOREMAN, ARK.--A 38-year-old Winthrop, Ark. man was hospitalized after jumping out the passenger window of a vehicle traveling an estimated 55 to 60 mph to retrieve his cigarette late Saturday, an official said.

Jeff Foran was riding in his friend's 2000 Dodge Stratus about 10 p.m. Saturday near the Arkansas-Oklahoma border when the cigarette he was smoking blew out the vehicle's front passenger window, said Arkansas State Police Trooper First Class Jamie Gravier.

Foran jumped out of the vehicle to retrieve the cigarette and hit the pavement, causing facial trauma.

A guy walks into his bedroom one night while his wife is lying there in bed, and under the guys arm is a sheep.
The guy looks up and says, "You see dear, this is the pig I'm fucking when you're not around."
The wife is a little shocked at this, but has the sense to realize something's wrong and replies "That's not a pig, that's a sheep..."

The guy says "I wasn't talking to you." 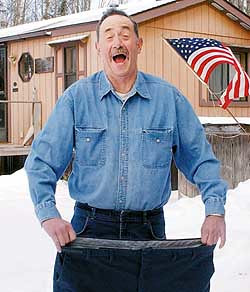 "Now my friends call me Bones!"