You can write this shit, George, but you can't say it.

So PJ, Pop and myself all sat down to watch Episode II: Attack of the Clones on his big 'ol TV tonight. Much better movie than Episode I. Better pacing, no Jake Lloyd, very little anything Gungan, a hotshot chase through the Blade Runner set, Natalie Portman in various states of undress...pretty much everything a 13-year old boy could hope for. 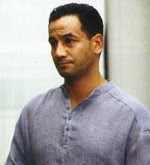 Jango                                      Typho
So much so that I remember the first time I saw the movie, I spent a good portion of my brain power trying to figure out how the head of security on Naboo was getting to Camino to clone himself and have a son, while still maintaining his position as the Senator's bodyguard. They even gave the one dude an eye-patch, which I was convinced was a Clark Kent-esque attempt at hiding his "secret identity" from everyone. George: You shoulda paid that black guy from the first movie whatever he wanted. You've got the cash, bro.

2. Ham-fisted romantic dialogue. I recall listening to Manakin's whole speech about "I don't like sand: It's coarse and rough...unlike you m'lady, who are soft." and I was thinking "How is it posssible that George Lucas ever got a woman into bed to father his children with schlocky lines like that?"

3. That scene where Amidala falls out of the ship into the sand, is knocked unconscious, then all of the sudden gets up and starts running like 'Freeze Tag' was over.

4. The Banking Clan? And the Techno-Union Droids? And, lemme see if I get this...the planet is called 'Geonosis' and there are rocks on it? We're lucky that they didn't name the water planet 'Hydrotopia' or Coruscant 'City-opolis'...sheesh. If only some of that simplicity could've gone into casting the Jango/Typho roles.

5. (And this was the big one.) Think of a quote from the Original Trilogy:

"Can somebody get this walking carpet out of my way?"
"And I thought they smelled bad on the outside"
"Do or do not. There is no try"
"You stuck up, half-witted, scruffy looking Nerf Herder!"
"Aren't you a little short for a stormtrooper?"
"Ah, Lord Vader, i should have recognized your foul stench as soon as I stepped on board"
"Laugh it up, fuzzball"
"Uh, we had a slight weapons malfunction, but uh... everything's perfectly all right now. We're fine. We're all fine here now, thank you. How are you?"
Etc.

Now think of a great line from the first two movies.
A-Ha! You can't think of even one can you?

The closest things are a couple of lousy puns...
Obi-Wan, watching Padme climb to the top of the post she was tied to:
"She seems to be on top of things"

C-3PO when his head was torn off:
"Oh, this is a drag" and "I'm quite beside myself"

What else is there?
Sam Jackson saying "This party's over"?
Bleh.
And there's nothing from the first movie either.

I dunno what that means, I'm sure there are lots of movies I like that don't have memorable lines...uh...OK maybe not but this is a sure sign that the writing is just not one of Lucas' priorities. I still enjoyed the hell outta that movie though.

Lookit me! I'm on a blog complaining about Star Wars!
Christ, what a dork.

This Air Force cadet was convinced that his roommate was dancing to all kinds of terrible music when he though nobody was looking, so he set up a webcam.
Go white boy go white boy go.

"Snow Shoes and Salt Pork"
"I'm sorry, did you just say something about salt pork?"
(Laughing) "No, no. That was just my Great Lakes Myth Society ringtone...I must have a phone call from my friend 'What A Strange Thing For A Record Label To Do'"
"Red jacket miners had celllll phones"

Now you can own the jeans actually worn by Jesus Christ.
The questions and comments at the bottom are really the best. 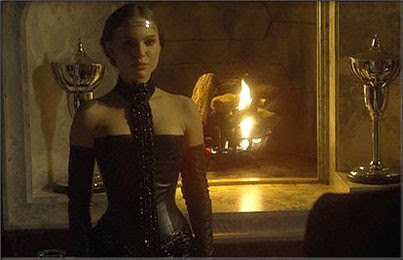 Thanks Perry
Thanks PJ
Thanks Rob
Thanks Mark
Thanks Brandon