sorry about the appalling lack of posts lately. I'm busy at work, busy with the fam, trying to put out a rock album, and trying to make out with my wife. This takes a lower priority...way after the making out part. If you've got good junk, send it my way and make my life easier.

Know who's got some cool-ass manhole covers? Japan.
that's who.

'Member Winnie Cooper from the Wonder Years? 'Member? She's all growed up.
Kevin, you were so right to keep going after her and not Becky Slater.

A couple in their nineties are both having problems remembering things.
They decide to go to the doctor for a checkup. The doctor tells them that they're physically okay, but they might want to start writing things down to help them remember.

Later that night while watching TV, the old man gets up from his chair.

His wife asks, "Where are you going?"

"To the kitchen" he replies.

"Will you get me a bowl of ice cream?"

"Don't you think you should write it down so you can remember it?" she asks.

"Well, I'd like some strawberries on top, too. You'd better write it down because you know you'll forget it."

He says, "I can remember that! You want a bowl of ice cream with strawberries."

"I'd also like whipped cream. I'm certain you'll forget that, so you'd better write it down!" she retorts.

Irritated, he says, "I don't need to write it down, I can remember it! Leave me alone! Ice cream with strawberries and whipped cream - I got it, for Christ's sake!" Then he grumbles into the kitchen.

After about 20 minutes, the old man returns from the kitchen and hands his wife a plate of bacon and eggs.
She stares at the plate for a moment and says - "Where's my toast?"

Pretty funny little movie with two girls trying to pick up the same guy at a bar.
Never underestimate the power of a cute brunette with glasses. 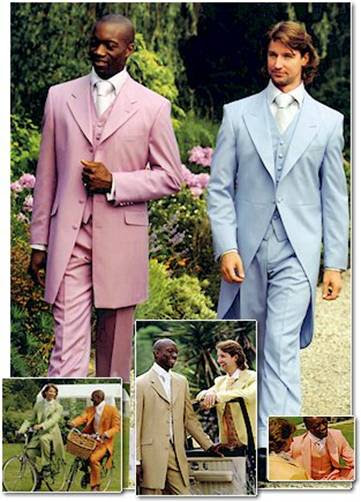 No, I don't really know either, but I'm way into these dudes on the bikes in the lower left.