Oooooh! Busted!
Payola rears its ugly head as SonyBMG gets nailed for offering gifts, giveaways and expensive trips known as "Flyaways" to radio programmers in exchange for getting their acts in heavy rotation. The best part is that they wouldn'tve gotten caught if they didn't get so fucking greedy:

In an e-mail sent in January 2003, an irate promotions employee instructs a colleague to withhold a free trip, known as a "flyaway," from stations that bury Celine Dion's "I Drove all Night" in its overnight rotation of songs. Written all in capital letters, it read:

"OK, HERE IT IS IN BLACK AND WHITE AND IT'S SERIOUS: IF A RADIO STATION GOT A FLYAWAY TO A CELINE SHOW IN LAS VEGAS FOR THE ADD, AND THEY'RE PLAYING THE SONG ALL IN OVERNIGHTS, THEY ARE NOT GETTING THE FLYAWAY. PLEASE FIX THE OVERNIGHT ROTATIONS IMMEDIATELY."

So this station was playing by the "Rules" and giving Madamoiselle Dion the required 56 spins a week, but only during the graveyard shifts, and the label/promotions guy says "Nooooo, you need to play it when we say to play it or we won't give you the presents we promised!"

In a related story, the Ann Arbor News' Roger LeLievre says this about the new Porchsleeper record: "Nineteen Seventy Two' is so hook-laden you know instantly that if radio wised up and added it to playlists it would be a hit."
Hmmm, I wonder if we paid the radio stations, if they would play the song.

Not to be outdone, Rob Theakston gets it:

I'll buy you a beer, how's that for payola?

This poor sap was busted trying to buy spray paint
because the clerk suspected him of huffing.

Funniest Thing Of The Day/Month!
So there's some kinda sporting event...My guess is Football, where every time they want to get the crowd fired up, they ring this bell. Well, it looks like this guy's got a clanger in his hand but I don't see how that's gonna fire up the crowd.
Ding-Dong!

As you may have noticed, I think I'm gonna start posting some of the records I'm listening to off to the right there. A lot of people ask me what I've been listening to lately, and this way I can scream "Haven't you been reading my Blooaaaag?" in a really whiny voice.
Note: I will never really do that. 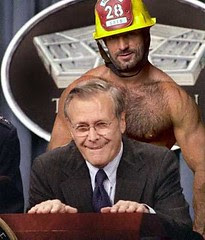 Borderline funny: At this dude's graduation, the students got to write what the presenter would say about them, so he went into a long speech about his friend "Mike Hawk" and how "Mike Hawk always stood up straight for him" and how he will "Remember the time he beat Mike Hawk at a wrestling tournament."
It's funnier if you say it out loud.

Thanks Dan
Thanks Rob
Thanks Sean
Thanks K