So we needed something for the inside of the upcoming Porchsleeper CD (CD release part this Saturday at the Lager House) and we didn't really want to put lyrics, and we didn't want to reprint the song titles another time (shame on all bands that do that...you don't need to list your song titles seven times in different places on your CD..what the hell is the matter with you?) so we decided to put in what really matters: We got together with a 30 pack of Stroh's and laid out a whole pile of our favorite albums on Brian's floor and took a picture of it.
Now available in convenient desktop wallpaper size
So then that was fun and we were drunk and I decided to make it into a challenge. Now each of the 25 albums are numbered (with one asterisked bonus question since that one is really hard and only Dave Below or maybe Rob Theakston will get it) for you to try and guess what has shaped the 'Sleeper sound that you may have never heard before in your life: So here's the deal.
The first person to e-mail me with the correct answers to all 25 album covers gets a free copy of the CD. And if you get all 25 plus the asterisked one, you get to make out for four-and-a-half minutes with Steve Bekkala
(boys or girls, either way).
Notes:
1. Gimme the Artist's Name and Album Title.
2. Number 25 is secretly coded as #26, (I told you we were drunk)
3. Number 19 is on the album cover, not the Hamtramck Blowout flyer.
4. #4 is gonna be tough for all you mofos that aren't reprezentin' the 1987 Washtenaw County scene.
5. Number 6 is a Various Artists LP, so that one's pretty much a freebie.
6. Man, that asterisked one is hard.
...small hint: that's the top corner of it poking over the "tongues" photo. (I told you we were drunk)

Allright bros, lemme know. Who's got the chops?

So apparently Michael Bay is gay. Scarlett Johansson totally wanted to do a nude scene in "The Island" but Bay made her wear a bra.
uh...If that guy ends up missing, you guys'll cover for me won't you?

In other news that will totally excite the guy who keeps Googling .:DataWhat?:. for "Scarlett Johansson"+"Headphones": here's this picture. What I dig is the fact that she's got the iPod, but she can't rock those tinny white earbuds, she's gotta crank the heavy-duty Bose noise cancelling cans.
Note to my wife: any time I refer to Sco-Jo's "cans" I'm always talking about her headphones. Just so long as we've got that straight.

Hyar! These Jesus comics are irreverent.
"See Jesus, when a man and a woman love each other, they like to touch each other...Sometimes though, things get a little rough, and then a hooker has to die." - Jesus' Grandpa

Sa-weet nerd shirts like all manner of "Blue Screen of Death" shirts, 404 error shirts, one with just a broken jpeg box, and this one sporting the screen where Pac Man totally glitches out on the 256th level after achieving a score of 3,333,360 - highest possible on the game.
Ah, Namco coin-op errors...some days I'll just let our Galaga game freak out for hours...put on "Meddle" or "Obscured by Clouds" and just stare at it...

Key-riced what an ugly dog.
It looks like something that crawled out of Jim Henson's grave after he was buried.

Something in this photo got erased 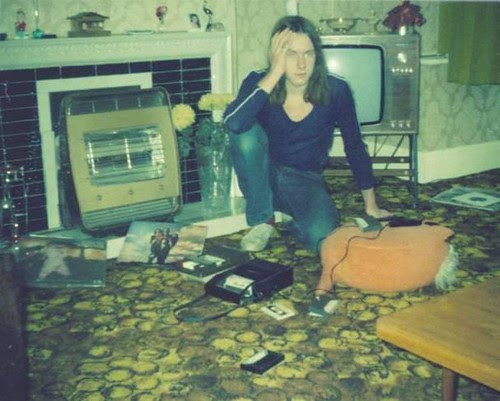 maybe one of those cassette tapes...maybe somthing else, but something is clearly no longer where it used to be.

Thanks Katy
Thanks Brian
Thanks Perry
Thanks 'Squiz
Thanks Jared
Comments: 0