Best thing of the day:
These folks put together a hy-larious preview reel of Found Videos that they discovered at yard sales and thrift stores.

The Wendy's Grill video reminds me of the McDonalds training videos that I used to watch on break when I worked at Mickey D's in high school. I would just sit in the break room, dig to the bottom of the video drawer, and find the funkiest most outdated videos you can imagine. Afros, feathered hair, totally 'State of the art' graphics...man.

We used to recommend them to the other workers:
"Oh man, have you seen 'Time Enough To Lean,Time Enough To Clean' yet? It is magnificent!"

We would critique these things like little stoner Gene Shalits: "Hmmm, I would've used the left-to-right wipe there...the circle wipe is soooo overused."

I would kill someone I didn't like to be able to see some of those again.

Top 10 Sexiest Album Covers?
To each his own, but I woulda put The World of Dolly Parton, Volume Two much higher up the list. 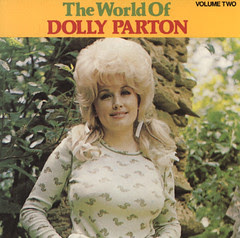 I dunno...There are just two things I really like about this album cover.

Know who are the best photographers in the world? We all are. Here is a page that posts all of the most interesting photos posted to Flickr over the past 24 hours.
Jesus Christ, people! look at these photos! We Are AWESOME!!!!

Speaking of Life affirming, here is Steve Jobs' commencement speech at Stanford from June.
This hit at just the right time. Thanks Dave.

Have you been hitting ThisIsMyComputerBlog?
THE DOG IS CALLING THE BIRDS!! HE IS WEARING HIS HANKERCHIEFS!! IT IS BECAUSE KING WINKLES IS ON THE PHONES WITH SUPER MOP-TOP!! THEY ARE YELLING ABOUT THE BEANS!!!!
TELL SUPER MOP-TOP TO HANG UP THE PHONE-BALLOONS!!! THE BIRD HAS THE BEANS!!!
That shit is genius, and I am waaaaay into it.

Everyone on the planet needs to do this: Click Here then vote for The Prime Ministers in the Detroit News Battle Of The Bands thing. It only takes a second, and they don't ask for an e-mail address or anything.
Don't do it because I've asked you to, do it because if my band was in this event, I'd still vote for the Prime Ministers. Because a). they're one of the best bands in Michigan, and b). because it's kinda desperate and creepy to vote for yourself.

Ok, so maybe this isn't so life-affirming, and it may send you straight to hell: There's this movie coming out called "The Aristocrats" which is just basically stand-up comedians telling the same filthy joke over and over again. Well, the South Park version of the joke is available online, and hoo boy. It is not for the weak of heart. The words "Not Safe For Work" don't really fit for this. No bad pictures, just bad words... and bad thoughts.
See, they start out telling the joke, but when it gets to that whole second level...well, you just gotta hear the joke.