So there's a couple hours of my life wasted.
While trying to get the good word out to you people I was having trouble connecting to the innerweb on my laptop. It kept saying:
No wireless networks were found in range

Make sure the wireless switch on your computer is on
To see an updated list, click "Refresh network list."
So I'm scrambling around trying to uninstall my wireless driver and reinstall it, trying to repair my LAN connections, updating my WEP encoding, all of this crazy shit, right? Finally I drag out the box that my laptop came in, looking through all of the documentation and trying (in vain) to find my Windows XP disc to try and reinstall any missing drivers, etc...so at this point I'm thinking "Christ, I've tried everything I know, I'm gonna have to haul this into work tomorrow and have Dan or Joe take a look at it," when I notice some advertising type on the side of the Gateway Box: "Use One convenient button to turn your wireless service on and off!" and I look and there's this little button hidden as a secondary function under F2: 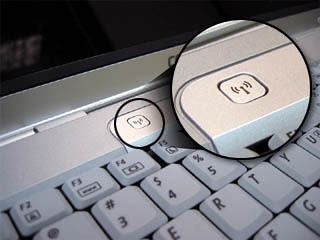 Believe it or not, mine is even more obscured than this one.
So I hit this little button, and lo and behold I am wirelessly wired. Jeez M. Crow. Doncha think this would be in the Gateway documentation somewhere? Online? In the booklet? No, I had to find it on the edge of the box that the damned thing came in, as a secondary advertising bullet point! Man, sometimes the simplest solution...

The only thing that made me feel better is that later I was looking for that graphic above and found this little bit of text online:

After completing the setup procedure - the first task I tried to accomplish was to set up the wireless network card to access my home network. As much as I hate to admit it, I was stymied for a few minutes trying to figure this out. For some reason, I couldn't get Windows XP to detect my home network. I even resorted to reading the manual and instructions, but they didn't mention anything useful about my problem. It turns out that I forgot to push the wireless network button on the keyboard. I had never used a notebook that had a push-button to activate or deactivate the wireless card. I really wish Compaq had labeled the button - or at least put something in the documentation about the button. Basically, I just felt really dumb for a few minutes. Once wireless was turned on - the wireless button takes on a peaceful blue glow. It took me 5 seconds to connect to my local wireless LAN.

And this guy reviews laptops for a living! So at least I didn't feel so bad after that.
::

Porchsleeper Rock Show. Thursday, August 4 at the Temple Club in Lansing. With The Fluoride Program, Starling Electric, and Speakerphone
Four bands with more booze and emotion than you can shake a burning couch at.

Second U.S. trailer for the Firefly Movie is now online. Wow is it good.
I've already seen the movie and I wanna see it again after seeing that trailer.

Detroit has Classical music radio once again: 90.9 WRCJ FM.
Get some culture, you heathens!

This high school nerd finishes a Rubik's cube in 13 seconds setting a new American record.
By far the best part of the video is when he goes back to his beyond-nerdy friends and buddy-punches one of 'em in the chest and says "That's a record"

Photos from Harry Potter & the Goblet of Fire which comes out at Christmas.
Three words for you: Tri. Wizard. Tournament.

Thanks Jared
Thanks David
Thanks Steve
Thanks PJ