Get Off The Hippie Bus 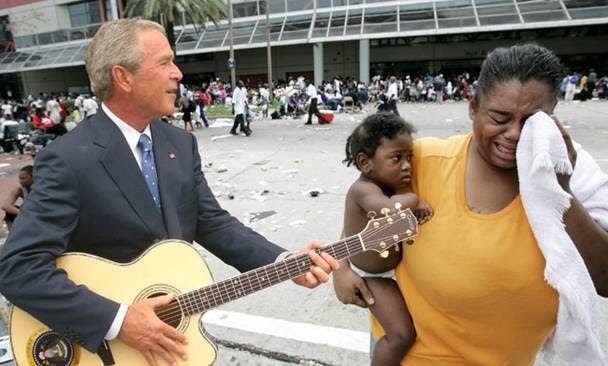 The scariest thing is that it looks like he's almost hitting a G chord.

A while ago I was watching this collection of found videos and one of the highlights was Tha Skillz to Man Tha Grillz which is a training video for how to make Wendy's cheesburgers, all done up with Hip-Hop flava.
Anyhoo, I was jazzed to see the whole video and now you can too.

Ha! Not only does Leeroy Jenkins play Warcraft, he also Plays Violin in Chicagoland avant garde clubs.
"Least I got Chopin"

A CNN weatherman gets fed the fuck up covering the Hurricane.
In my opinion, totally justified. That lady just interrupts him and says "What does that mean?" just as he's saying "What this means is..."

Kanye West gets fed the fuck up with the Bush Administration.
I loooove how nervous he looks, like "I'm 'bout to drop this bomb, and the man ain't gonna like it, but I gotta say it anyway: 'George Bush doesn't care about black people'" and Mike Myers is all like "Uhhhh...uhhh...I'm from Canada, eh?" It's at about 1:30 and worth watching. 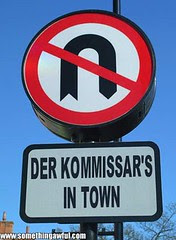 Hey! Hot Shit! The music fans at Miles of Music have put the new Porchsleeper record on their front page with a 100% Guarantee.
"When you see "100% Guaranteed" next to a release listed on our website, in our e-mail, in our blog or told over the phone by one of our courteous operators, it means we guarantee that you will enjoy that record. If you don't, send it back and we'll give you full credit of the cost of the CD towards your next purchase."

Jesus, thanks, bros. That means a lot.

Secretary of Defense Dick Cheney speaking on NPR in 1991 (re:Gulf War I):

"The notion that we ought to now go to Baghdad and somehow take control of the country strikes me as an extremely serious one in terms of what we’d have to do once we got there. You’d probably have to put some new government in place. It’s not clear what kind of government that would be, how long you’d have to stay. For the U.S. to get involved militarily in determining the outcome of the struggle over who’s going to govern in Iraq strikes me as a classic definition of a quagmire."

Heard this soundbyte on NPR the other day. Threw up in my mouth.

Huh...so this band OK Go filmed a video in their backyard, never intending it to be seen on the internet, and all of the sudden ... IT IS ON THE INTERNET!!! AND PEOPLE ARE SEEING IT AND DOWNLOADING IT!!!! AND HEARING THE SONG, AND HEY, IT'S PRETTY CATCHY!!! AND MAYBE NOW I WANT TO SEE OK GO IN CONCERT AND BUY THEIR T-SHIRT/STICKER/CAN KOOZIE!!!
It's called viral marketing you indie hipster bastards, let's call a spade a spade. You don't do that much involved choreography if you "never intend anyone else to see it." P.S. I wish my band had thought of it first. 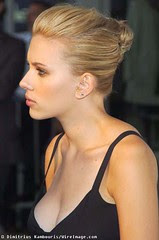 Anytime I see something screech across a room and latch onto someone's neck, and the guy screams and tries to get it off, I have to laugh, because what is that thing?

Quick personal note to an individual out there in the world somewhere...the vast, vast majority of you should disregard this missive...
Attn: Zachary L. Johnson
Please pay your fucking bills.

You owe $13,696.17 to Fleet Bank (which I'm assuming is owned by different people than the Fleet Enema company, but the way my ass is constantly being irritated, I can't be sure) and I really wish you would pay it.

Ms. Green at Risk Managements Alternatives, Andrea Johnson at Alliance One Credit Agency, and Mr. Reynold at Credigy Services Corp have been hounding me for the better part of two years about your delinquent accounts to Fleet Bank, First USA Visa, and DTE Energy. Oh, and the $1,018.92 that you owe SBC Michigan under the clever ailas Zhe Ahnte Z Johnson is being requested by CFC Financial LLC. Please contact Tom Kelsh to resolve this issue.

I have learned that the last four digits of your Social Security number are different than mine, which is probably the only thing keeping me from going to court and/or prison.
So to sum up:
Please pay your bills, you fucking fuck, so that I can watch televizzle with my darling bride, my vomiting dog, and a can of Labatts Blue without having to explain myself to the next creditor who is bound to call.