iTunes 5 has problems with comments in ID3 tags

So I downloaded iTunes 5 today because it has some hotshot functionality for what they're calling "Smart Shuffle." Basically there is a slider that allows you to group songs by the same artist together in Shuffle mode, or make it so that the same artist doesn't get played twice in a row. 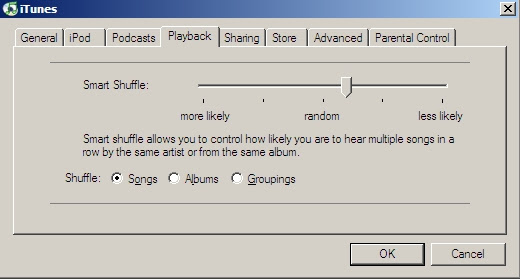 But the problem(s) lie in a couple of other things.

First, Now sound doesn't work on my laptop. I'm not talking about just iTunes, I'm talking playing CDs, Windows Media Player, the sounds when I start up and shut down...nuthin. I don't know how it could be tied to this iTunes update, alls I'm sayin' is, before I "upgraded" there was sound coming out of my speakers/headphones, and after I installed iTunes v.5 I got nuthin. Not even a "ding"

Second and equally weird, it goofed up my Comments in the application/ID3 tags.

As some of you may recall, I get pretty freaky with tagging my iTunes. I go into the Comments portion of iTunes and put in different track-level descriptors for whatever mood I think that song is appropriate for. As some of you who are really down with the data may know, this function goes into the ID3 tag of the actual MP3/AAC file and writes that in somewhere...I guess in the COMM section of the ID3 tag.

(For those of you who are interested, track down the smallest/shortest MP3 in your collection - the actual file, like in My Documents -> My Music -> Beatles - Abbey Road -> Her Majesty - right click on it and open with Notepad. You'll see a lot of crazy crap in there. Pick a small file, 'cause it takes a second).

Anyhoo, for those of you who have witnessed my playlist insanity firsthand, this is what my iTunes Library looks like: 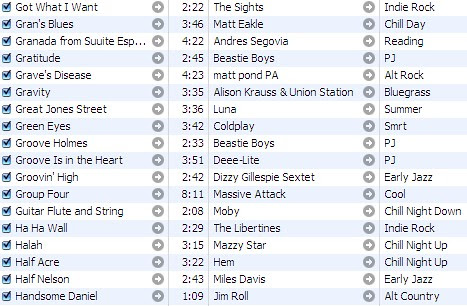 but now I note that some of them look like this:

Dude! WTF?!?
What's with the long strings of hexidecimal characters in my comments field replacing my awesome codewords like "Chill Night" and "Smrt"??? Why did version 4.9 read comments correctly and version 5 reading something else within the tag?


So I cracked open the ID3 tag for The Shins' "The Celibate Life" and peered inside. What I see is that my previously commented text of the ever-imaginative tag "Alt Rock" is still in there, right in the first line (along with the series of hex codes):

Some savvy nerds among you will also notice AMG A_IDs, P_IDs, and T_IDs in there too. We are everywhere.


Some of the ID3 tags that I've seen also have the "Commented" text at the very end:

I dunno where the old version of iTunes was getting the comments, but at least it was always right.


It may also have something to do with the 'iTunes Library.itl' file, which is also screwed up now:

So my guess is that the new version of iTunes is not reading comments correctly, either in the ID3 tag or the .itl file. Where the previous versions would write and read comments correctly, this new version is reading them incorrectly. This seems weird to me. Apple is usually much more ahead of the game than this. It would be one thing if there was some new format that iTunes had trouble reading, but to have it shift from being correct in the last version to being wrong in this version seems like a bug that needs to be fixed.

I dunno what's up with my sound not working...that's a totally different issue.

Thoughts? Lee? Rob? Steve? Goody? Bee-Low? Kelly? Feldkamp? Somebody Smart? C'mon nerds, bust out some science! Do these assumptions hold water? I'd like to get some input on this so I can throw it back to Apple and see if they can hop in the version 5.1 train asap.

Thanks for answering my ten millionth question Dan