There is no waiting in the candy room

The first advice I got from the apple discussion board was that "some other tag & rename application must've created the problems I'm seeing" (execpt that I never used any tag & rename programs). The guy's other advice was to download The Godfather which is a digital music file cleanup device.
Looking in there, this is what I saw:

It looks like ID3 tag v1.1 is displaying the comment correctly,
but ID3 tag v.2.3 has the SoundCheck hex codes in front of it.

Conclusion: iTunes must have changed what they chose to display as the Comment tag from v1.1 layout to v2.3 layout without properly finding out the havoc it could wreak.
My final frustration and solution was to just re-tag the files manually. There were only like 500 of 'em, and what else would I do an a Wednesday night?

This high school band teacher arranged two DJ Shadow songs for percussion ensemble and to that I say: Hells yeah.
Some of the breakbeat stuff gets a little disjointed, but Jeez, it's a high school kid on a live drum kit, give him a break. 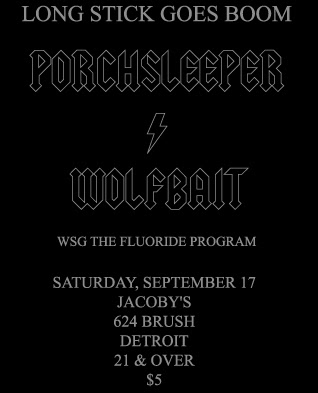 if you have not seen Wolfbait you are really missing out. My favorite guy is the guitarist Sagitario who plays...nay Shreads with a full quiver of arrows on his back, and often wears a t-shirt with an iron-on photo of himself shooting a bow on it. Plus, you already know The Fluoride Program kicks ass, so I guess I'll see you there.

Tom Waits was awarded 2.6 million dollars because Frito Lay used a sound-alike on one of their salsa commercials, He spent it all on candy.
Man that guy's cool.

much like Martin Luther King, I had a dream.

I was at a Cracker Barrel-esque family restaurant and Tim Monger announced loudly "There is no waiting in the candy room!" so I went into this long narrow room off to the side of the restaurant whose walls were lined with different brands of candy. There were also two metalsmiths in there, one old and one young. I could tell that they both didn't want to wait on me, so they intently bent over their small kilns and their jewelry making tools, each hoping that I would bother the other one. Thing is, I really wanted some root beer barrels.

Like bad. So I started poking around the candy room. Way in the back, in a smaller room seperated by a dusty curtain, I found some old candies on shelves. I located an old teacup that was mostly filled with torn-off wrappers, but at the bottom were some wrapped candies that had the tell-tale brown barrel shape. Next to the cup was a small hand-written sign that said "Tea-Barrel Candies." I grabbed the teacup and took it to the front of the shop, hoping that the young or old metalsmith could tell me about them, but they both were so falsely interested in their work that neither would make eye contact. I figured "Well, I'm gonna buy 'em anyway" so I unwrapped one and popped it into my mouth. It tasted fine, but it clearly was not a root beer barrel, it tasted more like iced tea. At that point I was so fed up with the two jewelry makers, I just went back and put the cup back and left the shop.