I could stand to hear a little more'a that...

I wouldn't bullshit you. If I thought it was a fun TV show, but a really cruddy movie, I'd just keep my trap shut, but they really did a good jorb. Even if you haven't seen the show, you will enjoy the movie.

If you have ever gotten any enjoyment out of this goofy Blog, I ask of you an eight dollar favor.

Or do what some savvy FireflyFans are doing: Pay for a ticket to see Serenity, then go see whatever other movie they want...Either way, the Box Office Grosses increase and Universal gets closer to greenlighting a sequel. 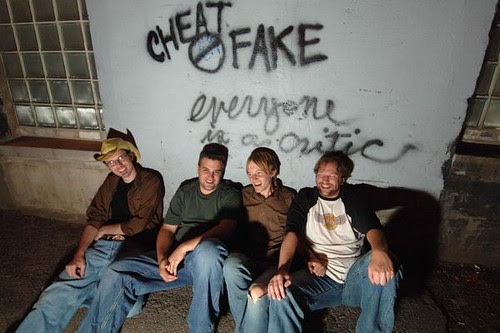 Man, look how close Steve's hand is to Brian's wanger!
If this isn't a band comfortable in their sexuality, I dunno what it is.

Photo of Dan and Tracee Blanche from Maxim Magazine.
While I do find Tracee most alluring as a readhead, the jet-black hair does suit her just fine.

Nice little national story on NPR about the germ count content in my Elementary school.
Bach Elementary class of '82 RULES!

Ha! An alarm clock that throws puzzle pieces into the air and won't shut off until you put the puzzle back together.
That'll start your day in a frustrated rage!

New song by the Darkness complete with sitar solo.
Didn't grab me at first, but it'sGrowing On Me.

I dunno why, but I find this photo of Tom Cruise leaving a porta-potty hilarious. 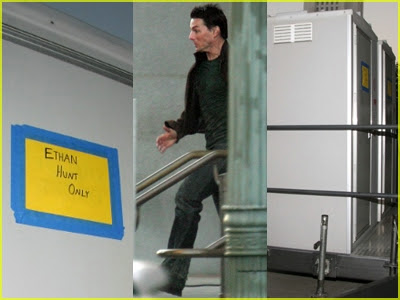 Lookit his face! And man can he not get outta there fast enough!

Thanks Jared
Thanks Collar
Thanks Ryan
Thanks Steve