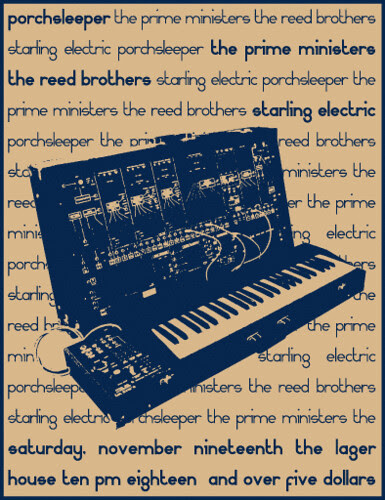 Porchsleeper at the Lager House this Saturday
with The Prime Ministers, Starling Electric and The Reed Brothers.
we will be the loud ones.

Speaking of loud and the Devil, here's the new Darkness Video.
One Way Ticket to Hell...And Back!

Leeroy Jenkins was featured in a question on Jeopardy.
Or an answer...or just part of a question...aw, I can never figure out how that works...

More funny: The Phat Phree takes on the horror of puberty on TV.

Jeremy Miller AKA Ben Seaver (Growing Pains):
He was one of the most awkward-looking debacles of puberty around. He donned a pencil-thin high school mustache and a mullet that couldn’t decide if it belonged to a “Keytarist” or a “Magician”. If I was a producer on this show, I’d have killed off old Ben Seaver around season four or five.

Top Thirty facts about Chuck Norris:
#6 Chuck Norris once roundhouse kicked someone so hard that his foot broke the speed of light, went back in time, and killed Amelia Earhart while she was flying over the Pacific Ocean.

Know what's one of the funniest things you can do? Read the Fark headlines:

Bush approval rating at 34 percent, which ties him with Lincoln's approval in South Carolina in 1863

Bad: You're sinking in a peat bog. Worse: Rescuers can't get to you. Worst: It's because your rottweilers are attacking them

Joaquin Phoenix does not have frogs in his hair

Thanks Exquisite Dead Guy
Thanks David
Thanks GoldenFiddle