Here are a bunch of hi-res photos of Scarlett Johansson from the Golden Globes.

Plus: Here is film footage of Sco-Jo getting her boob grabbed by Isaac Mizrahi. 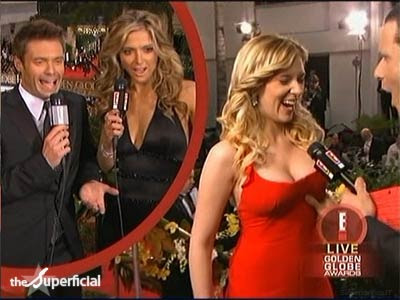 Oh to be a gay man in Hollywood that night...

Also also, apparently I don't need TV anymore because at YouTube they have all of her sketches from last week's Saturday Night Live.
Does Lorne Michaels know about this? Seriously, how long until that site is sued into non-existance?


Swear to God, last Scarlett reference (of the day):
Johansson Regrets Wardrobe Malfunction
Blonde bombshell Scarlett Johansson is furious with herself for letting vanity come before fashion sense at last year's Golden Globe awards, after bursting out of her dress. The curvy Lost In Translation star was so eager to have a knockout figure-hugging dress for the red carpet appearance she ignored designer Roland Mouret's advice and demanded the gown be made a little closer-fitting. Johansson recalls, "I kept saying: 'I want it to be tighter!' And he replied: 'I'm telling you, you're not going to be able to sit down.'" And the actress immediately regretted her decision when, on getting into her car, the zip broke open and she was forced to take emergency measures with a needle and thread. She says, "I presented my award and had to go straight home to be cut out of the dress. It was a disaster."

Terrific gallery of High-speed photos taken just as things are exploding or being shot.
Bang! Sploosh!

Really beautiful paintings by Chris Turnham.
The first four 2D images are part of a series that depict scenes from Decemberists songs.

Vivid and striking Wallpapers.
They must be a typeface company 'cause there are some cool-ass fonts in there.

Clockr is a clock function that uses Flickr images for each of the numbers.
Computers can do that?

A2P.C.: Trying to find out the days that they do curbside pickup for Christmas Trees took me forever on the City of Ann Arbor website, until I realized that I should have been Googling for "Holiday Evergreen Trees"...Jesus Christ, people, can't we even call Christmas Trees Christmas Trees anymore?
Ann Arbor is overrated. 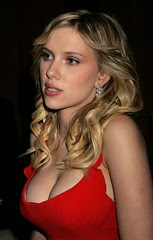 Thanks Perry
Thanks Skyler
Thanks Goody
Thanks Metafilter
Thanks Chris
Thanks BoingBoing
Thanks for everything ScarlettJohansson.Org