WebJay presents itself to be a community for music fans to get together and share web-based playlists of MP3s, WMAs and any other way that music can be presented on the innerweb. Basically it is a collection of users who dig around on blogs and band websites to find sound files, then put them in playlists that people can browse through and listen to on their own.

The pretty neat thing is that it's pretty easy to sign up (for free), create your own blank playlist, then just go into other people's playlists and copy their songs into your playlist. Now you're not really sharing songs, and you're not transferring audio files or anything, you're just basically creating a super-simple HTML page with the links to where these songs already exist on the web. Sort of in the same way as if you coded a webpage to first look at this one MP3 you heard on Fluxblog, then another link to an MP3 hosted on your favorite local band's page, then dug around and found a guy who made a cool mash-up of Hip-Hop vs. Phillip Glass, then made it so that you could automatically launch each of those links one after the other.

That's really the neat part, is that you can launch the entire playlist in iTunes or Windows Media Player and it'll run like your own online radio station. 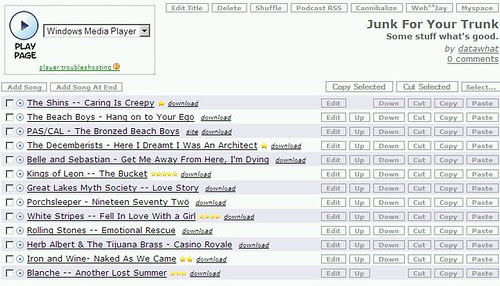 They were just bought by Yahoo for an undisclosed amount.

Funny Interview Segment:
TNL: so the rumors are true: Webjay acquired by Yahoo! You should post it on your blog.
Lucas Gonze: That's right. It turns out that when they sign up new people, y! makes them put on this pointy hat
which sorts them into "houses". This makes no sense to me, but it turns out that I am "hufflepuff"
TNL: Hee hee... stay away from Slitherins
Lucas Gonze: They're over in the DRM group.

So who knows if that means the functionality or business model will change. There is a slight feeling of creepiness about the whole thing, since you are playing back (and given the option to download) all kinds of music, even mainstream major label artists (Beatles, Stones, Garth Brooks who I'm sure is pissed). Granted, Webjay is not hosting these files, but they are sort of approving of their use. In their "About" section they say something about "If you are a playlister it is very important for you to stick to authorized music. Webjay exists to promote music which has been authorized for distribution on the web, not to make it easier to find unauthorized music. DO NOT POST LINKS TO UNAUTHORIZED SONGS." They position themselves kinda like Google in that they allow people to find the information, but remains neutral in whatever people choose to do with the music.

Also, since all of the sound files available through the interface are hand-tagged, there is no standardization or even verification that what you're hearing is really the right thing. An unscrupulous bar band could go in and tag all of their songs as "Previously Unreleased Song -- The Replacements" just to generate interest... It reminds me of the heady days of Napster when The Gourds' version of "Gin & Juice" was being incorrectly passed around the 'net as a Phish song.

Also also, since the whole flapjack relies on external links, some songs listed in peoples' playlists may no longer be available from the host site. So if I've linked to six songs from my favorite unauthorized Air Supply fansite and all of the sudden Sigfried & Roy or whoever those two dudes are put the smackdown on that site, my playlist now has six holes in it which used to be Air Supply but are now just Air (and not the cool French band either). 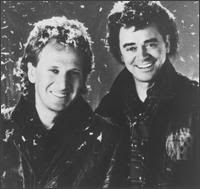 There is some sort of video playlist function that does not really interest me so I'm ignoring it.

So I dunno...while it is certainly cool and a great way to steal a whole bunch of music, I don't see a real business model there (aside from the advertising revenue aimed at return visits by "Community Members"), it's still a little clunky, not very intuitive (the forums are full of misspelled posts in all caps asking "HOW DO U MAKE A PALYLISTS???!!1!!1!"), and not as hands-off as a Pandora or a LaunchCast. Still, Lucas Gonze seems pretty bright, so Yahoo scooping him up was a good idea, and who knows, some pretty cool technology could come out of it.
Comments: 1