Dave Below sent me some photos of an indoor ski resort in Dubai and in one of the photos, you can really tell that these dudes are just blown away to be hanging out in the snow: 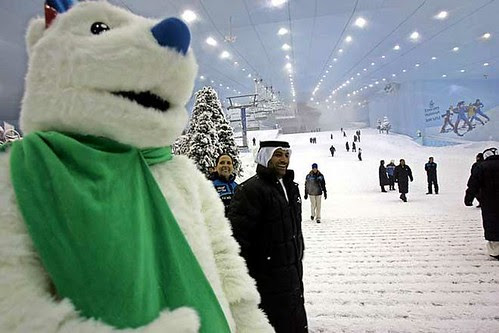 And this got me to thinking about a longtime wish/project that I've been scheming of:

I've been long wishing for a couple million dollars to invest in a similar "Indoor Beach" here in Michigan.

Think about it, a lot of the people that live in Michigan are total lake and beach people (that's why a lot of people choose to live here) but their beach-going and backyard BBQing are limited to late May (if you're lucky) through the first week of September (again, if you're lucky).

Imagine if there was an indoor beach where you could go in mid-February, bring the kids and a swimsuit, get some huge-ass lights and hang 'em from the high ceiling, get that full sun feeling, maybe you could rent a little chunk of manicured grass for two hours and grill up some burgers on a park-provided grill. Maybe one or two small waterslides for the tykes, but overall: just an indoor "outside" available for the price of a movie ticket.
How hot-shit would this be!?! 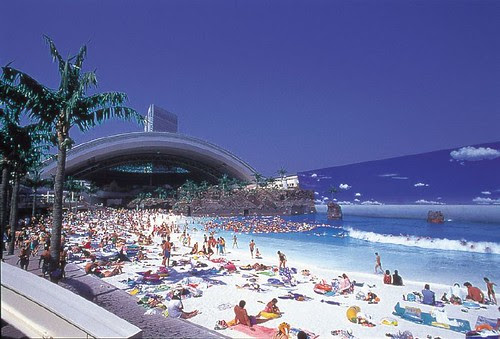 Imagine the revenue from people with "Seasonal Affectation Disorder" alone!
...And I'm not talking about the Great Wolf Lodge or some Happy Scrappy Hero Pup Waterpark, crammed with slides and water fountains and dumping buckets and what-not, I'm talking a relaxing, open space that feels like outside. There's a big difference between this (cramped, chlorine-ridden kiddie pool) and this (airy, bright, like summertime).

Two years ago in February Penny and I drove eight hours all the way to Nashville to go to this resort: 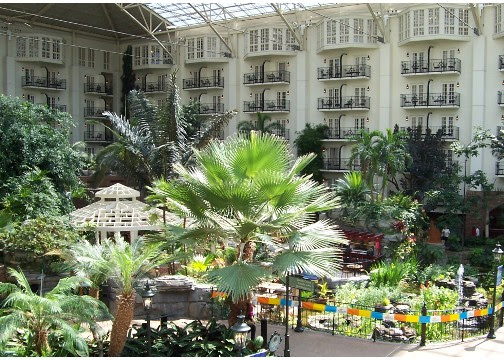 The appeal: Acres of indoor atriums all kept at a temperate 70 degrees. Our hotel room had a "Balcony" that opened up at treetop level...we would just open the doors and let the "breeze" from "outside" come in. I sat on the balcony, read a book in the sunlight and smoked a cigar.

But man was it nice to snag a little bit of Summertime in the middle of a bleak winter.

Think about how nice that would be, to go on a grey Sunday afternoon and walk into a huge, brightly lit room that smells like an outdoor pool (trees, grass, dirt, sand, water), and take off your winter parka, flop a towel down on the beach and dig into that juicy novel.

Just soak it up for a couple hours, then be re-charged for the rest of the week.

Look at how awesome this would be!!!

If anybody knows anybody rich, lemme know.

Zillow (terrible name btw) is a combination of Google Maps and the Real Estate section of your local paper. Look up addresses and see what that property is valued at.
Note: The only two addresses I could think of off the top of my head, 1600 Pennsylvania Ave and 1060 West Addison, are not listed.

Pretty awesome SNL Fred Armisen sketch called "The Tangent" and can I just say that his stream-of-consciousness blathering is beyond surreal and beyond hilarious.
And whaddya know? Sco-Jo just happens to pop up in the middle of it!

Even if you don't really like flash games, it's amazing how if you're playing this get out of a maze game, it really is functional and you feel like you're moving around in that space.

Another great Lost website with a really in-depth (but not wordy) Easter Eggs section of images from both seasons.
Oh, and PJ totally nailed that it was Kate's mom serving Sawyer in the diner.

Documentary about Harry Nilsson coming out from the same folks who did the Brian Wilson SMiLE documentary. Could be good.
Even if you don't care about Harry Nilsson's music, you should watch it just for the "Freaked-Out-Old-California-Musician" factor. Some of those dudes have been around the block...possibly on their faces the entire time. If anybody can get a full list, that'd be great. I saw Micky Dolenz, the Smothers Brothers, Peter Gabriel, Eric Idle, Yoko Ono, I recognize the bald guy, but not the guy who looks like Arliss or the Cowardly Lion guy and there's a little tiny weasel guy in there too... 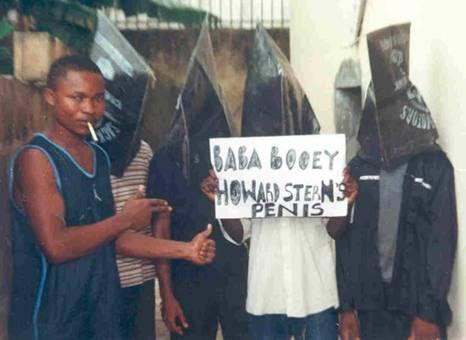