Cream of the crop: The Osmond Family doing a performance of a song called "Crazy Horses" which is some kind of early '70s attempt to get a Mormon heavy metal sound started...worth watching for the crazy dancing alone.
Review of the album Here.

The trailer for Titanic 2 in which Leonardo DiCaprio is found frozen in a block of ice and is thawed out in present day.
Excellent use of Simon & Garfunkel's "The Only Living Boy in New York" by the way. 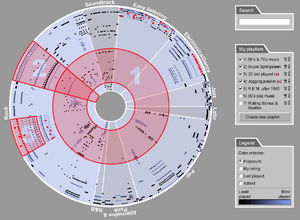 There are two things that everyone loves, cats and lasers!
Best yet: Cats with lasers that come out of their mouths.

Another video: This is footage of Steve Jobs first announcing the iPod.
Please note the comic sans font in the presentation, the Beatles album cover in the background, and the reverence when discussing the dazzling concept of fitting 1000 songs on a portable listening device.

Clear Channel is streaming Bruce Springsteen's new album of Pete Seeger covers for free (with an annoying woman's voice in the background every five minutes telling you that you're listening to Clear Channel's Sneak Peek).
It's a good album for him to make right now...it's really loose and it sounds like he had fun recording it, and he steered clear of most of the Pete Seeger songs that everybody's sick of ("If I Had a Hammer," "Turn Turn Turn," etc.) although "We Shall Overcome" made it in there.

Fake footage of a graffiti mogul tagging Air Force One in the middle of the night.
Looks real, is fake. 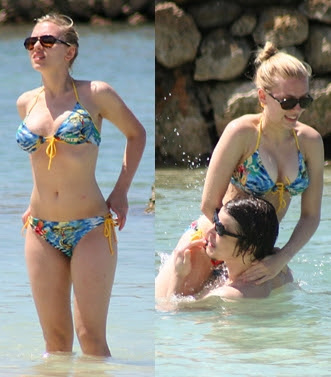 Scarlett Johansson in a Bikini!