Buy It Again, For The Last Time

They're re-...no ...Finally... no...Well, the Original Trilogy is coming out on DVD, although it is strangely considered to be "Supplemental Material" to go along with a re-re-rerelease of the Special Edition versions.

I just have this image of that announcer guy's voice intoning Buy It Again, For The Last Time

This site has a pretty good listing of the changes that Episode IV has undergone in its history, making a pretty convincing argument that the majority of the changes are improvements.
Also, Hasbro is issuing a George Lucas action figure. 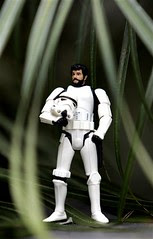 I totally lifted this from BoingBoing

Phillips & Norelco invite you to Shave Everywhere.
The Test Drive is particularly bold for a major corporation to intimate...and intimate they do!

From Wired: (the last paragraph is particularly amusing)

According to Billboard, Bearshare has folded its hand after being raised $30 million in piracy settlement by the RIAA, which gained the authority to go after file sharing firms after last year's momentous MGM v. Grokster decision. (The court found that P2P companies could be held liable for piracy taking place on their networks.)

Following the announcement, all file-sharing activity halted immediately as music fans worldwide emptied their bank accounts in order to purchase DRM-ed replacements for all of the music they'd downloaded from P2P services over the past few years. Every record executive was given a pony of his or her own.

More cute Sco-Jo pictures including this one that I enjoy for some reason.
Must be the stroller.

Oh, poor Tom Cruise. For some reason his Auditors let him on BET where he was asked to imitate a hip-hop dance that is popular with the kids nowadays.
In this case I feel sorry for the guy..he's on TV and in front of a whole bunch of people, a rap song comes on and the host says "Hey Tom, in front of all of these peopel and the television audience, do this goofy dance!" What's the guy supposed to do? None of these people are Scientologists, some of them are even Negros... he is totally out of his element. The only real way out of this predicament would have been if he stripped down to his tidy whities, got a white button-down shirt, and had someone magically throw him a pair of Ray-Ban Wayfarers and do the Risky Business sock-slide. Anything less was going to end in disaster.

Clever little pizza box that folds into a coffin for your pizza bones (what we call the uneaten crusts at Johnsonia). 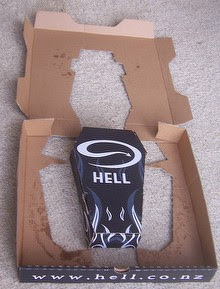