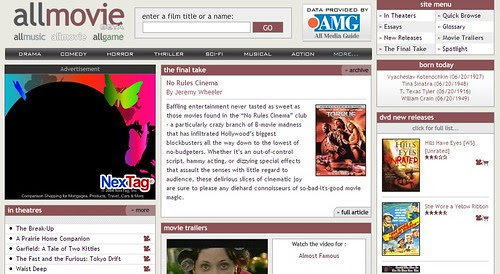 Still in progress, but a marked improvement over the internet-circa-1989 look that it had until yesterday.

In similar news, boring to nearly everyone but me, Pandora annouced their "Backstage" function, which is essentially a really well-done integration of AMG data, creating a mix of AllMusic's in-depth information and Pandora's cool-ass streaming radio.
Although I have to admit that this description of a Rollins spoken word piece has me baffled: Punk influences [check], acoustic sonority thru composed melodic style [jigga wha?], minor key tonality [uh..sorta], an aggressive male vocalist [too true], offensive lyrics [lyrics?]

A scan of Matt Stone's memo to the MPAA censors
during the shooting of the South Park movie: 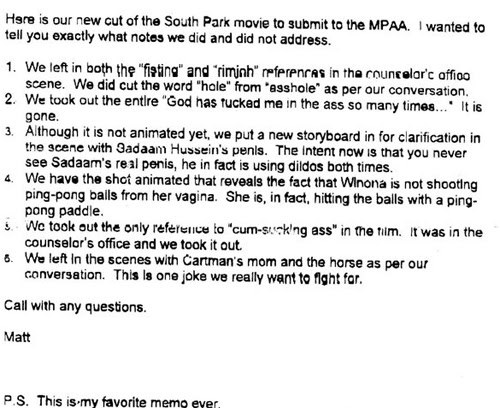 P.S. This is my favorite memo ever.

I can't tell if this is fake or not, but this guy built a leaning tower of Jenga blocks and is showing it off to a reporter just before the people from the Guiness Book show up.
Needless to say, it ends badly for the tower.

Dunno if you've been on it, but Lee Isles' tumble blag is really bringing it of late.
Music, NYC, tech, photography, and this hilariously NSFW wedding photo. Thanks Lee
Thanks BoingBoing
Thanks Ryan
Thanks Exquisite Dead Guy