I know I've talked about Banksy before but if you're not intimately familiar with him, here is his website. He is loosely called a "grafitti artist" but his stuff actually veers closer to social commentary and cultural art.
His latest escapades made me smile wide.
He purchased a copy of Paris Hilton's new album, scanned the booklet and created his own version of the artwork and music on a CDR. 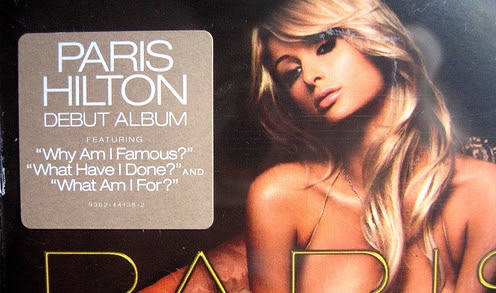 Highlights include the sticker on the front that says "Why Am I Famous?" "What Have I Done?" text on the inside that says "Every CD you buy puts me further out of your league," and all sorts of tweaked photos.

The best part is that he made 500 of these CDs and slipped them back onto the shelves at HMV and Virgin Records stores all across England.

Flickr set of photos of the CD booklet Here:

Crocodile Hunter Steve Irwin? He's D.Y.K.
What are the odds that he would be killed by a wild animal? Oh, yeah I guess so...But stabbed in the heart by a stingray? Jesus, man...that's fucked up.

Sgt. PetSounds is a mashup of The Beatles' "Sgt. Pepper's Lonely Hearts Club Band" and The Beach Boys' "Pet Sounds" and while this sounds like a great idea, most of the MP3s get a little too dissonant for my tastes.
Give it a shot, what else are you doing?

Watching some great tennis for 11 to 13 hours a day means you'll end up seeing the same commercials over and over again, but the Andy Roddick vs. Pong Amex commercial is pretty funny every time.
There is also an online game but it is asking me for a plugin, and I'm too lazy...how is it possible in 2006 I need a plugin to play Pong?

Thanks Exquisite Dead Guy
Thanks Lee
Thanks BoingBoing