That Was The Year That Was: 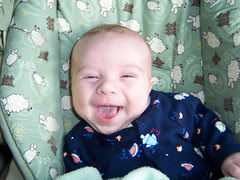 No question about it.

Tivo
I do watch a lot more TV (which was my fear all along) but I feel like I watch better TV.

Heroes
Save the cheerleader, Save the Fall season.

Studio 60 on the Sunset Strip
I don't care what everybody else on the planet says, I like this show.

Mythbusters
I never really caught it much before I had Tivo, but now I think I've seen all of 'em.

Seinfeld
I was always a casual fan, but now Tivo delivers four episodes every day and I have fully immersed myself.

The Office
Can somebody lend me season one of the US version?

Bear Cavalry
and other funny images from Soundmurder via DetroitLuv.

Smokey Robinson's frozen red beans & rice.
The soul is in the bowl.

Sco-Jo nekkid on the cover of Vanity Fair.
Fair indeed.

Ikea opening in Canton.
A little piece of Sweden in Southeast Michigan.

Seeing Porchsleeper from the audience for the first time.
Hey, that band's really good!

Junkiness
Kind of like People Magzine meets The Onion (back when The Onion was funny)...but meaner...like they don't care that they're going to Hell.

BabyRoadies - My Dad-centric website.
Ironically updated less frequently now that Matt and I both have kids.

Keane - "Under the Iron Sea"
Like Coldplay minus guitars. That's all.
Listen Here:

Jenny Lewis - "Rabbit Fur Coat"
Sweet and Spooky. Jenny Lewis is the woman who shows up on several of the Postal Service songs, but this is decidedly less electronica and more alt-country.
Listen Here:

Built to Spill - "You In Reverse"
Another solid record, including my Summer 2006 anthem "Conventional Wisdom."
Listen Here:

The Dixie Chicks - "Taking the Long Way"
Not as moving as "Home" but that string/horn section in "Not Ready to Make Nice" was my most goosebumpy moment in music this year.
Listen Here:

Bedouin Soundclash - "Sounding a Mosaic"
Reggae? Singer/Songwriter? Canadian? I don't really understand it, but I like it.
Listen Here:

The Fluoride Program - "Roadside Flowers"
All of the best parts of sprawling inventive rock music without any of the stupid bullshit.
Listen Here:

The Beatles - "LOVE"
Not earth shattering as far as mash-ups go, but hearing this stuff re-mastered and cleaned up is a real treat.
Listen Here:

The Replacements - "Don't You Know Who I Think I Was?: The Best of the Replacements"
Nice to have a single-disc "Best Of" plus the two new songs are pretty decent.

Hem - "Funnel Cloud"
Hasn't grabbed me like the first two albums did, but maybe I need to give it a little more time.
Listen Here:

The Prestige
Vintage magic, David Bowie as Nikola Tesla and Sco-jo in a showgirl outfit? Ok.

Superman Returns
I thought it was super, man.

V for Vendetta
E for Engrossing.

Caddyshack
Just that one Chevy Chase scene over and over again.

Blankets by Craig Thompson
Not just a graphic novel, maybe the best book I read all year.

Ragtime by E.L. Doctorow.
They should make this into a movie.

The Historian by Elizabeth Kostova
Kinda like if The Da Vinci Code was written by J.K. Rowling making out with Anne Rice.

McDonalds constantly cleaning their shake machines.
Don't get me wrong...I'm glad they clean 'em, but it seemed as though every time we went to get my unborn son a milkshake, they had the whole machine torn apart. It got so bad that I would call ahead to see if their shake machine was working before we left the house.

Those god-damned little ads for upcoming shows that pop up in the corner of your TV.
We were watching "Oceans 11" the other day, and Kyra Sedgewyck kept wandering onscreen with a flashlight to tell us about "The Closer." And it's not like these ads are just in the corner anymore...they're right in the bottom third of the screen to catch the eye of those nitwits who don't have the aspect ratio set correctly on their big-screen TVs. STOP IT TV!!!

Andre Agassi retired.
Made for some compelling tennis though.

Britney Spears' vagina
Y'know, for quite some time I thought I'd like to see it, but as it turns out I wish I hadn't.

The Tigers lost the World Series.
Next year...

James Brown, Don Knotts and my Grandpa Johnson died.
Each of whom had varying influences on who I am today.

The actual process of giving birth.
Some people say it is a beautiful thing, but from where I was standing for 36 hours, it seems more like moving a piano up three flights of stairs by yourself.

Thanos closed
Man I could go for a slice of deep dish Sicilian right fucking now.

Wait a minute...Pluto isn't a planet?
Screw you, science.

One last great thing from 2006: This Gif