The results of the "Name That Booze Addled Scribe" contest are in, and the winner is my friend Gerard with 21 out of 25 correct, and the runner up (but probably somebody that Bukowski would rather hang out with if given the choice) is Megan [1] with a respectable 16 out of 25. 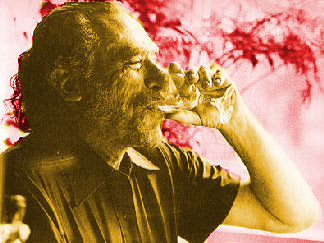 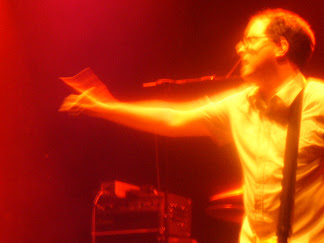 1.
I had no money but the drinks kept arriving
to then I wasn't the bar clown but the bar fool
but at times a fool will find a greater fool to admire him,
and, it was a crowded place


2.
moving pictures helped us get through to september.
they made a movie about me and you. it was half nude and half true.
it was a bloodsucking summer.
i spent half the time trying to get paid from our savior. swishing though the city center.

The Hold Steady - "The Swish"


3.
the nights went into days and the days went into nights
and we babbled on through, sometimes bedding down, badly.
through the drink, the uppers, the downers, I got myself to imagine things--
say, that this one was the golden girl of the golden heart
and the golden way of laughter and love and hope


4.
and the money came off the streets out of hock shops out of nowhere
and all that mattered was the next bottle
and we drank and sang and fought
were in and out of drunk tanks, car crashes, hospitals


5.
she said i won't be much for conversation if we go and do the rest of this.
she said i've never been much for conservation.
i kinda dig these awkward silences.


6.
all your favorite books. they wouldn't seem so well written
if you were just a little bit more well read.
jack kerouac is dead. he drank himself to death.


7.
and the rain came down thick and mean and steady
and you heard it banging against the roofs and into the ground
waterfalls of it came down

Charles Bukowski - "We Ain't Got No Money, Honey, But We Got Rain"


8.
and then the spider from his dank hole nervous and exposed
the puff of body swelling hanging there
not really quite knowing, and then knowing


9.
his elbow was a spiderweb. with five spiders trapped inside.
he said: the last guy didn't have to die.
but the first four looked so nice. i wanted five.


10.
woke up in the 20s. there were flappers and fruits in white suits.
it was right before the crash.
we got thrashed throughout the 30s.
queuing up for soup in scabby sores.
and they sent us off to war.
we came back in the 40s.
there were wheelchairs, guns and tickertape.
we poured it on the floor and made love to the interstates.

Charles Bukowski - "Something For The Touts, The Nuns, The Grocery Clerks, And You ..."


13.
seeing lousy movies but only for the a/c.
skimpy little outfits and bad guys acting crazy.
that's how i know when you're lying. it looks just like overacting.
kids on the corner are cracking and caving in.


14.
the scratches on my back
they formed into a choir
and belted out a chorus.

The Hold Steady - "Some Kooks"


15.
sometimes you've got to kill 4 or 5 thousand men before you somehow
get to believe that the sparrow is immortal,
money is piss and that you have been wasting your time.

Charles Bukowski - "man in the sun"


16.
They found him walking along the freeway all red in front
he had taken a rusty tin can and cut off his sexual machinery
as if to say,- see what you've done to me?
you might as well have the rest.


17.
in tiny rented rooms I was struck by miracles
and even now after decades of listening I still am able to hear
a new work never heard before that is totally
bright, a fresh-blazing sun

Charles Bukowski - "me and Faulkner"


18.
she only pays attention to the prices of cigarettes.
she says she hopes they get cheaper...

we hung out pretty close with some questionable folks.
we got ideas from some dangerous thinkers. we put our mouths up to some dangerous drinks.
some nights we almost froze


19.
our educational system tells us that we can all be big-ass winners
it hasn't told us about the gutters or the suicides.


20.
we drank, drugged,
stayed in the center of the rug,
through sunset, sunrise,
played Scrabble for 8 or ten hours


21.
i was at some party and she said she had to talk to me
and then she didn't say anything.
i can't believe i worried about hurting you while you were banging around the bars
trying to scratch up something new.

The Hold Steady - "Modesto Is Not That Sweet"


22.
i see judas in the hard eyes of the boys working the corners.
i feel jesus in the clumsiness of young and awkward lovers.


23.
I keep searching the streets for that
blood-wine battleship she drives
with a weak battery, and the doors
hanging from broken hinges.

Charles Bukowski - "I made a mistake"


24.
hey william butler yeats.
the irish seemed wired last nite.
they tried to separate our girls from our guys.
they had cigarettes where there were supposed to be eyes.


25.
the goldfish sing all night with guitars,
and the whores go down with the stars