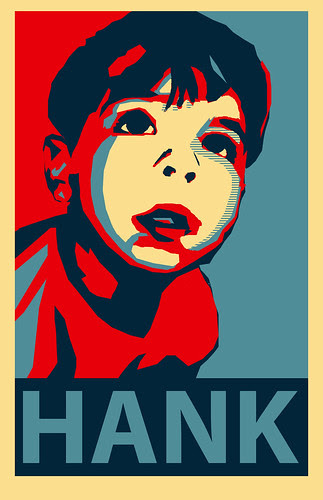 PJ and her new job.
Whew!

Ann Arbor got a Robot Supply & Repair Store.
Just in time I might add. And they speak Bocce.

The awesome-larious David Lee Roth isolated vocals from "Runnin with the Devil."
Iaintlyintoyoubabyimonlygonnatellyouonetime!!!!AAAAAH!

Those chaps at Improv Everywhere creating the greatest Little League game of all time.
America wins!

Obama
America wins! Holy shit, guys. Can you even believe this? I keep waiting for the other shoe to drop.

Netflix
Skeptical at first, now I dunno how we lived without it. Although I have to say, I've rated over 1000 movies and it doesn't give me any suggestions for other movies I might like. Is that weird? That's weird, right?

iPod Touch and the app store.
So much computing power, used exclusively for goofing around.

This American Life on PRI.
Sadly, this is what I usually listen to on my iPod. What a dork.

iTunes Genius proving that people are interested in intelligent playlists on their collection management software and their devices.
Who woulda thunk it?

The opening ceremonies of the Summer Olympics.
The Chinese can do anything. Serious.

Facebook
I dipped my toe in tentatively, but now I need to check it every day. Got in touch with a lot of bros from back in the day this year.

My Morning Jacket - "Evil Urges"
Starting with the 3rd song, it is this really great 70s California AM Pop album. Plus my kid sings along with "Highly Suspicious" like a champ.

The Whigs - "Mission Control"
Kicking myself that I missed the Porchsleeper/Whigs show now that I've really dug into this album.

The Hold Steady - "Stay Positive"
I had high expectations, and while it is their weakest album (in my opinion) it was still better than most everything else this year.

Vampire Weekend - "Vampire Weekend"
Who gave these goofy college kids the right to make one of the most refreshing World Music punk albums of the year?

Neil Young - "Sugar Mountain Live at Canterbury House"
Both of my parents were at this show in 1968. A really great intimate performance by Neil with lots of rambling conversation. Steve and I had a great time at our two-person listening party.

Old 97s- "Blame It on Gravity"
Another winner from these guys.

Death Cab for Cutie - "Narrow Stairs"
Another winner from these guys.

Fleet Foxes - "Fleet Foxes"
I didn't lock into these guys until I watched this Take Away Show where they performed "Blue Ridge Mountains" and "Sun Giant" acoustically. Quite nice.

Harry Nilsson - "Popeye [Original Soundtrack]"
So this has been kicking around for a while but never released on CD. In 2008 a really high-quality vinyl rip surfaced and I snatched it up. C'mon, somebody! Give this the boxed set treatment it deserves!

The Whigs - "Right Hand On My Heart"
My Morning Jacket - "I'm Amazed"
The Buzzcocks - "Why Can't I Touch It?"
Vampire Weekend - "A-Punk"
Fleet Foxes - "Blue Ridge Mountains"
Glen Hansard & Marketa Irglova - "Falling Slowly"
The Hold Steady - "Lord, I'm Discouraged"
Death Cab for Cutie - "I Will Possess Your Heart"
Sloan - "Believe in Me"
Blondie - "Will Anything Happen?"
The Watson Twins - "Just Like Heaven"
Old 97's - "No Baby I"
Neil Young - "On The Way Home [Live - Canterbury House 1968]"
Harry "The Hipster" Gibson - "Stop That Dancin' Up There"
Jack Johnson - "Hope"

A couple of notes:

If you listen to the playlist at the link, it is meant to be listened to in that order. I'm an "Album" kind of guy in that way.

The Dark Iron Man Knight
Man that movie was entertaining.

Smokey & the Bandit
Rekindled an old love affair this year.

Cars
I have now seen this movie four thousand times. And Hank just got it last week.

Pete Seeger: The Power of Song
My favorite scene was when Pete and his wife were just walking through Central Park giving an interview and this truly awed woman stops him to tell him what a difference he made in her life. I promised myself I wasn't going to cry...

The Accidental Time Machine by Joe Haldeman
This guy handled time travel exactly the way I would. Or I will. Or I did. Huh? Huh? See what I did there?

Paul Moves Out by Michel Rabagliati
Very sweet and honest.

Serpent Girl: A Novel by Matthew Carnahan
First line: "When I came to I was squatting and clutching my balls like they were a dangerous little animal that might escape..."

When You Are Engulfed in Flames by David Sedaris
Autographed no less.

Middlesex by Jeffrey Eugenides
I get it now.

Willie Nelson: An Epic Life by Joe Nick Patoski
I have not yet finished this book. I'm on page 500 and he's filming Dukes of Hazzard. No idea what the next hundred pages will bring.

Does Facebook count as a book? 'Cause that's pretty much all I read all year.

Mad Men
This is why I smoke cigarettes and drink so much Scotch at work now.

30 Rock
Oh my God the Oprah one. So awesome.

Yo Gabba Gabba & Jack's Big Music Show
Both of these shows have some of the best music on TV right now:

Biz Markie's Beat of the Day: (teaching kids how to beatbox)

Failblog
I get it. 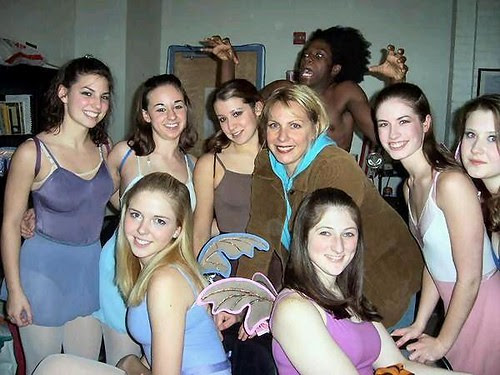 The Big Picture
They're pictures, see...and they're big.

Hulu
TV on the Radio. But on the internet.

Goodreads
A terrific interface for keeping track of the books you've read. I anticipate a solid book recommendation engine coming out of this data at some point.

Muxtape
The design is not interesting and the creator was seriously mistaken about the labels being "cool" with people uploading whatever music they want to be freely available.

The new Portishead album.
Portishead has two modes in my opinion: CoolSexy spy movie soundtrack vibe or scary Halloween Beth Gibbons is a screechy witch mode. This album did not groove with me.

Thomas the Tank Engine, Bob the Builder, Clifford the Big Red Dog
These shows suck dick. There is also a Winnie the Pooh show where Pooh and Tigger and a girl (Christopher Robin???) are detectives. It also sucks.

Chinese Democracy by "Guns & Roses"
"it's always interesting to see what would happen if you locked a moderately creative redneck in a mansion with the fourth Queen and the first Nine Inch Nails albums, some underwater field recordings, a copy of ProTools without the delete function and 17 years to make an album." - Brian Raleigh