An incredible image of The Majestic Theater in Detroit in 1909. 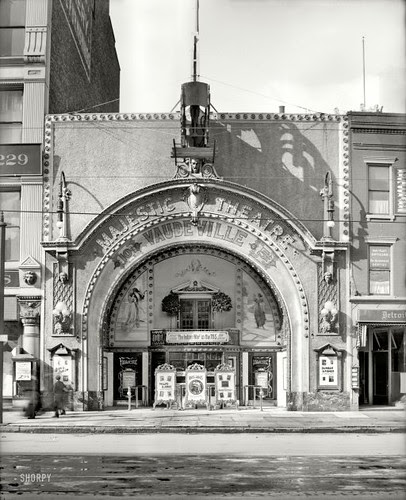 Do yourself a favor and check out the hi-res version.

I've been chuckling at Wistream which is a curated feed of comedian twitter tweet twoots. Some examples:

kyle_kinane
I guess when a restaurant's sign is made from cut-up magazine pages taped to the wall, the diarrhea is redundant.

avery_edison
I must finally be using Photoshop right because it keeps crashing.

jeff_sawyer
The weather outside is frightful, the writers in here quite spiteful, but since we've no place to go, alamo, chapeau, renault.

hank_thompson
If you drink the juice at the bottom of a cole slaw container and nobody is there to see it, does it still make a sound? The answer is yes.

danforth_france
Last line from my movie pitch: "And then, over the hill, there are unicorns as far as the eye can see. CREDITS."

The Map of Metal fukking rulez: 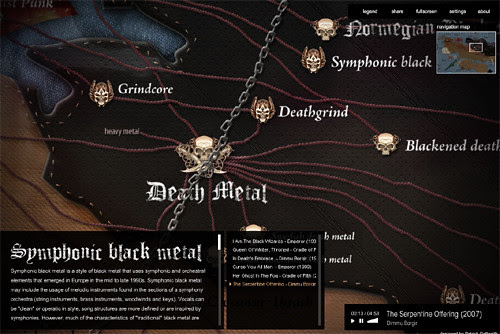 Fully explorable with playlists of each genre.

You may remember a billion years ago when MTV was playing videos, but now you have to go to this site called YesYesYall.org to see the cutting edge videos
Plus: Occasional bewbs.

10 Mind-Blowing Easter Eggs hidden in Famous Albums.
I remember finding the secret booklet in "Kid A" and I was all like "Whoa"

Nerdy: Inside the Netflix shipping hub:
I have to admit that the organized calisthenics reminded me of Mr. Burns trying to get the Nuclear Power Plant workers to exercise:

Thanks David
Thanks Waxy.org
Thanks Steve