Pillows, Blankets and the Cat's Pajamas 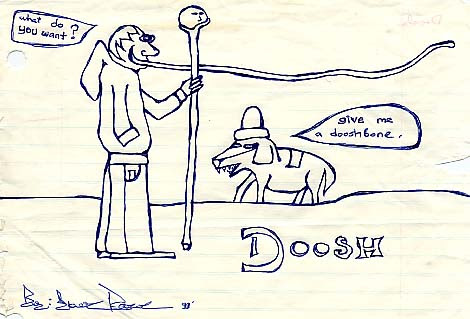 
Danzig laid out??
Unholy Passion?
Old tough guy is a wuss?
Put your bangs into a devil-lock and be the judge.
One side of the story follows:


Bad show with Danzig last night. I posted this on Blabbermouth.com before he tries to sue me for knocking him out. Read this and die with laughter!!!!!!!!!!!!!!

Before crazy rumors begin to spread I would like to explain what happened:

North Side Kings were to play with Danzig last night in Tuba City, Arizona. To make a long story short the whole show was a disaster and a few bands got bumped off. Mr. Danzig (or his managment??) refused to push back the original scheduled time slot so North Side Kings and Rapid Fire would have to play "after" his set. Whatever- we agreeded to play later because we drove 6 hours and didn't feel like going home without playing.

Needless to say, as soon as Danzig was finished, the venue turned on the lights and Danzigs crew and the staging company began to take the stage apart almost instantly. I confronted Mr. Danzig backsatge while he was signing autographs and told him I thought he was an asshole because of his "rockstar" attitude and no consideration twords the FEW other bands that got bumped off tonight. In a fit of rage he turned around and slammed me into the wall yelling "fuck you motherfucker" trying to be a big toughguy in front of his fans. I -in self defence punched him in the face knocking him out as he was attacking me again. He went down, bleeding from his mouth, eyes rolled back, and in shock that he got knocked to the floor so quickly.

A friend happened to tape the entire incident and this is all documented. Many witnesses saw him attack me, and I did what any man would do.

It was unfortunate that this went the way it did -and I hoped Glen Danzig learned a valuable lession tonight - Do not lay your hands on anyone unless you can handle what may happen.

I aploigize for nothing, except for the poor little kids that had to witness this big asshole get his ass kicked in a matter of seconds.....

Keeping the core in Corporate America

Now, peep the footage here or here or here.
Seems like azpunk has many links to it now.
::


Palestinian Hip Hop? How 'bout it?
Check out this trailer by artist and old EMU peep JACQUELINE SALLOUM.
::

Maybe you want to build your own robot?
Sheesh! I don't know.
::


Or, maybe you want to dork out and see a bunch of films based on H.P.Lovecraft works...
::


Or, maybe, just maybe you want to break down a long article about "London Calling" by the Clash
::

Yes, this is me getting back to the data.
Big ups to Dan yesterday...Ryan checks in tomorrow. Rob on Friday.


Thanks V.A.
Thanks Dale
Comments: 0