I'd Rather Kiss a Wookiee.

rumor is that this isn't photoshopped or nuthin'


Here's a great short clip of Bill Gates demonstrating something with Windows 98 to an auditorium full of people and he receives The Blue Screen of Death!!!
uh...moving right along...


I think Bose's new uMusic technology is what Dave Datta has been working on.

"Consider the hassle of managing your treasured, but unwieldy, CD collection. The Lifestyle 48 DVD system changes all that with unique Bose technology that stores up to 340 hours of music. The uMusic intelligent playback system actually listens to your music and learns your preferences, then makes selections based on what you like. No more searching for CDs or deciding which tracks to listen to. Whatever mood you’re in, the uMusic system is ready with just the songs you want to hear."

Boston.com
"It's essentially a giant hard drive that can store the contents of up to 350 compact discs. UMusic links each track with information about its genre, tone, and musicians. As uMusic plays songs from your collection, it notices how you use the remote control: which songs you skip, and which ones you ''tag" with a negative or positive rating. If a disc was stored recently, the system will play it more often, assuming that you bought it recently."

Newsday.Com:
"The program automatically "profiles" individual listeners' musical tastes. It compresses and stores songs on the systems' hard discs - up to 340 hours in the Lifestyle 48 system, Bose says. Then the installed database identifies and tags each track not only by title and artist but by mood, genre and other semi-subjective attributes. Based on direct and indirect information on habits provided by the listener, the software manages preferences.

Bose says the database in the Lifestyle systems, which sell for $3,000 and $4,000, can identify up to half a million CD titles, and the company plans to provide new-release updates on a downloadable DVD disc every few months."


DataWhat Senator Chris Holoka makes the scene on Aint-It-Cool-News.
Scroll down to the second picture!
He's the dorky one!


Here is the trailer for It Came From Detroit, a full-length documentary that will probably play everywhere (except Detroit).
I see Dan and Tracee from Blanche...I see Jacoby's...


A guy dressed in a rather shoddy Batman costume tried to scale the wall at Buckingham Palace.
Commissioner Gordon unavailable for comment.


Choke:
A blonde was shopping and came across a silver thermos.
She was quite fascinated by it, so she picked it up and brought it over to the clerk to ask what it was.
The clerk said, "Why, that's a thermos.....it keeps some things hot and some things cold."

"Wow, said the blonde, "that's amazing....I'm going to buy it!"
So she bought the thermos and took it to work the next day.
Her boss saw it on her desk. "What's that,' he asked?
"Why, that's a thermos.....it keeps hot things hot and cold things cold," she replied.
Her boss inquired, "What do you have in it?"
The blonde replied, "Two popsicles, and some coffee".


Denise Richards to appear in Playboy this December.
Not as exciting as it woulda been a couple years ago, but damned if I can find anybody complaining.

What if: Bush vs. Jesus? 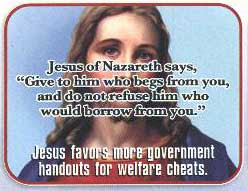 
Thanks Chris
Thanks David
Thanks Ryan