WaveOfDestruction.org seems to be one of the best sites for video and photos.

Believe In Magic (Austin's Blog) is hosting the most widely known videos.

.:Note:. Respect to AsianTsunamiVideos.com
since they are displaying and hosting the video information in the most clear and stable manner possible. Nice work, citizen.

The image doesn't really do it justice. This is a longer video shot from the balcony of a hotel. An Australian(?) family, or at least a father and a young son, see the first (relatively) smaller wave come in. It's funny 'cause the father says "Jay-sus Kroist" and then the kid follows him and says "Jay-sus Kroist" just like his ol' pop. The second wave comes into the resort pretty spectacularly, and then the Dad tells the kids to "Get In, Get In" and they all run for cover (although in reality, they are high enough not to be hit by the wave...not that I blame them mind you).
Courtesy of AsianTsunamiVideos.com...scroll down

This one doesn't actually show the wave, but does show a massive river of debris flowing down the middle of the street including whole buses and uprooted trees.
Courtesy of AsianTsunamiVideos.com...scroll down

Amateur footage from people visiting the Vivekananda Rock Memorial, situated at the southern tip of Kanyakumari. The tsunami wave hits the wall and sends large amounts of water over the top of the memorial which has a height of 113 feet. The footage is repeated at the end of the clip in slow motion.
Courtesy of AsianTsunamiVideos.com...scroll down

This is footage shot by a restaurant owner from high above, you see a lone man on the beach as the wave really hits.

I had some trouble linking directly. If you can't find it, try to go here: http://www.ap.org/
then, click on 7,000 More Bodies Discovered in Indonesia on the right.
scroll down to Amateur Video Shows Tsunami Striking Thai Beach. This may rotate around with another couple videos, so hunt around... 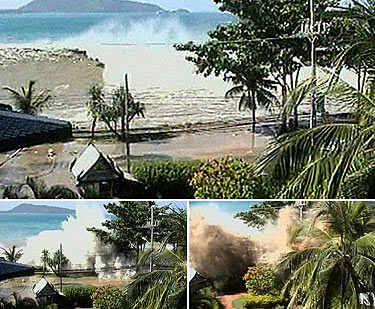 Sort of a "Picture-In-Picture" shot of the wave coming into a Phuket Resort shot by two different people.
Courtesy of WaveOfDestruction.org

About three and a half minutes narrated by a German tourist. He films the wave as it is first noticed way out on the horizon. You can see two or three large boats/yachts hustling to get out of the way. He keeps filming until the wave goes past the ships then heads back to a beachside bungalow. Really clear sweeping shots of the whole horizon as the wave is coming closer.
Courtesy of WaveOfDestruction.org

This is a collection of videos from a Dutch News Program. A good overview for those who have not seen any footage yet, and some footage I had not seen before.
Courtesy of Alexander Meijer 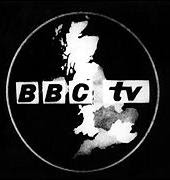 This is a 14 minute long broadcast/recap from the BBC. Some science, some footage of the wave, some occasional (mild) graphic content. I have not watched it all...or even most of it.
Courtesy of Alexander Meijer

Amateur footage of the wave coming in. This looks like it may be directly above the spot where that older couple was seen clinging to the wall.
Courtesy of This site(?)

This one starts with a volleyball net, then you can see the huge wave roll in from across the sea. People think of it as a curiosity until they realize the magnitude of it, then run into a more jungle-y area to safety. A guy says "Holy Crap!" I don't blame him.
Courtesy of Asian Tsunami Videos (at the bottom called "The most amazing tsunami video I've seen")

This one starts with semi-grainy footage from inside either a large house or hotel in Indonesia. Looks like some people were filming and then noticed noise outside, so they go to their window/balcony and you can see huge masses of water rolling by the window. Note: this is not the footage with the couple clinging to the wall in what looks like a swimming pool.
Courtesy of Asian Tsunami Videos (called "Wow")

A really quick shot of the wave coming in and crashing into a garden between two large hills. Three people are standing in the garden as the wave comes in, and the video stops as the wave gets close to them.
Courtesy of Asian Tsunami Videos (called "From Thailand")

Shot almost from above, this footage of the wave coming into an Indian beach, through trees and flooding into the streets. This is in Quicktime, and relatively small.
Courtesy of Cheese & Crackers

From a rooftop of a hotel on Patong Beach, you see the big wave come into the beach, then crash through a low building with many arches. There is extended footage of water filling the streets below.
Courtesy WaveOfDestruction.org

Another one shot from the beach. The cameraman is standing on a cement platform probably 50 yards from the beach. He is amused by the waves and the lone wader out in the water until the larger waves come up the beach and hit the bottom of the platform where he and a woman are standing.
Courtesy of Asian Tsunami Videos (called "From Penang, Malasia")

A couple from Australia(?) film from their hotel balcony as the wave comes across the beach and floods into the huge swimming pool. People are standing in street clothes around the pool but they run into the hotel when they see the wave coming. The film ends with the couple running down the corridor of the hotel.
Courtesy of Asian Tsunami Videos (called "From Sri Lanka")

Shot from inside a hotel restaurant, there is a lot of pretty shaky footage at first, then the wave comes into the building. The cameraman rushes outside and sees an older couple clinging to a railing that gives way.
Courtesy of Asian Tsunami Videos (called "Tsunami hitting Phuket Beach, Thailand")

Footage by an English speaking couple who shoot from their hotel balcony as the wave comes through an open-air restaurant/cabana and into a lagoon in the courtyard of the hotel. The clip ends with footage of the debris floating around in the courtyard.
Courtesy of Asian Tsunami Videos (called "Amazing video, maybe the best of the bunch at giving you the impact of the wave.")

A short and shaky video of the wave rolling into Indonesia. A long boat takes on a pretty big wave (grainy). Lots of jumpy footage of people's backs as they're running away or escaping on scooters. This version is kinda crappy 'cause you have to sit through an ad...

A short video of comparatively smaller waves rolling on the beach in Kenya. Some empty boats get tossed around.
A kid seems to be having the best day of his life.
Courtesy of Asian Tsunami Videos (called "From Kenya, fishing boats being tossed around like toys in the water.")

I guess every year the Quiantang River in China gets a "Tidal Bore" that wooshes through the riverbed. People line up every year to watch it go by, but this year it was slightly larger than expected. Again, not from the 2004 Tsunami, but pretty amazing nonetheless.
Courtesy of USC's Tsunami information page


This interview from the dreaded Fox News talks with one of the bloggers from Boing-Boing.net about how the blogging community has been a real news source for this event. It also shows some footage of the wave that I've seen on TV but nowhere on the net.

BRTurbo shows these same videos in a nice streaming layout.

Andy Baio put together This List of videos with descriptions on Waxy.org.

A similar collection of videos on Cheese & Crackers.

More Tsunami info is grouped at tsunami-videos-and-pictures.blogspot.com
No images but good text links

.:Note:. There are several photos of a huge wave crashing around a temple. A noteworthy one was of a huge brown and frothy wave with a bunch of people running in front of it Apparently these are from a Tidal Surge in China in 2002, and not from this current event.
They were cool, but here at DataWhat we are all about data integrity. You can still see 'em at WaveOfDestruction.org

Man oh man, Here's a spooky shot taken from a trolley just before the wave hit:

There's also a pretty spectacular fake photo on this page too...


21 images of children playing on a Malaysian beach moments before the tsunami sends them scrambling for shelter.


9 tourist images from a beach in Thailand.

A series of images as the tsunami hit Phi Phi Island.

Photos by J.T. and Caroline Malatesta, posted on WaveOfDestruction.org


A series of images taken from an airplane as the Tsunami hit.


This was the image of the wave coming in that we kept seeing on TV the first night.

Site with a bunch of really amazing photos of the Tidal Wave from a balcony on the beach.

.:New:. Three Photos of the wave coming into Krabi, Thailand.
Also seen in the six photos at Getty Images.

The family seen in the photos made it out alive just fine.


.:New:. Collage from a Swedish Newspaper.

Photo of the wave coming in.

Really well-shot series of photos from one of the locations.

These photos are non-graphic (i.e. no dead bodies or grief stricken people).


This Photo is huge, but really interesting.


Another photo of the landscape left behind. 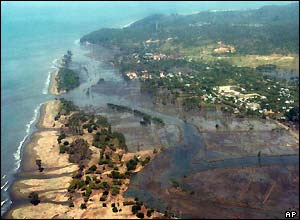 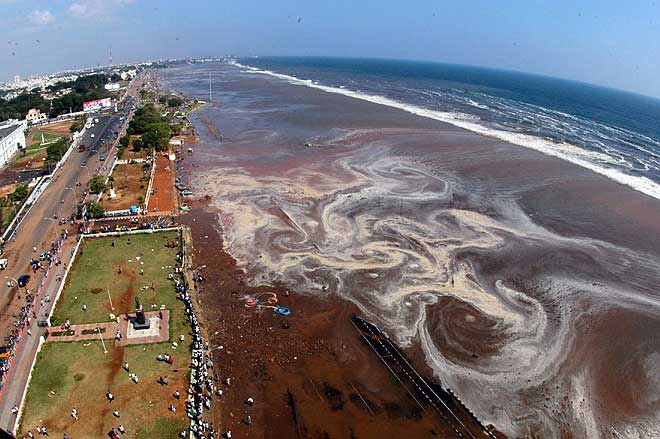 Two photos from on the ocean as it happened.

you can see how quickly the water rose and fell against that island near Patong Beach.
That long brown section was moving really fast according to the guy who gives the account.
Translation and more story here


Photos of Indonesia before and after.

Also, Tony Demark's site has a really neat function where you can toggle back and forth between before and after satellite photos.


Photo of a car floating away.

Some of the same photos are on WaveOfDestruction.org but they're laid out really nicely.

This Page of Thailand photos might be interesting, but it's down temporarily.

Looks like the quake altered the map and rattled the earth's orbit.

Seismic report from the campus of Virginia Tech.

Finally, I really like this headline: "Jet Li escapes tsunami with minor injuries"
...like he was jumping out of the way at the last second.

Just a reminder: Mother Nature can kick your ass.


Teaser trailer for "The Hitchhiker's Guide to the Galaxy" is now online.
Don't Panic.


Hyar! Chicken shacks from every state in the union.
Who knew those birds were so well travelled?


Thanks Goody
Thanks Dadid
Thanks David
Thanks Steve
Thanks Rob