Know who's my new best friend? Steve Hall is my new best friend.
Wanna know why? Because he knows I love Lee Morgan's "The Rumproller" and when Blue Note put out a frickin' sweet-ass t-shirt (in brown) with the album's image on it, he bought one for me.

Yes my friendshp can be bought. Look how sweet this t-shirt is!!!


Actually, I am really glad that t-shirt arrived today 'cause the day started out really shitty. So since PJ is sick, I get up at 6:45 and take the dog out. Well it was warm yesterday and then a light snow fell overnight, so when my sleepy heel hit our icy concrete steps, my world got suddenly very different. All of the sudden I was looking up at the still-dark sky. I could feel my heel skim over the top of each of the four hard poured-cement steps as they skipped by me. I had just enough time to twist like a salmon forcing his way upstream before bouncing once off of the steps, rebounding and landing on the sidewalk. As I laid on the walk, gathering my wits, sensing for blood loss and broken bones, I look over and not only is the dog urinating without a care in the world, she's sort of casually glancing over her shoulder as if to say "Uh...do you mind keeping it down? I'm kinda working on something right here."

Where's my Saint Bernard bounding through the snow
with that little wooden barrel of sweet, sweet brandy under his chin?

So anyway I dust myself off and creak my way back into the house thinking two things:

1. I'm really glad that it was me that took the spill and not Penny. A sick, sleep-deprived black belt is not someone I would like to deal with after she takes a cement-meets-ice tumble at 6:45 in the morning.

2. Thank you Christian Hosoi, Steve Caballero, Lance Mountain, Per Welinder, Mike McGill, Tony Alva, and to a lesser extent Tony Hawk, for teaching me how to take a fall when the deck slips out from under me. If not for my experience from 1983-1988 on a skateboard, I'm certain that I would have died this morning. While was in the air, by body (still!) miraculously shifted so that I landed on my hip and upper shoulder instead of splitting open my skull/tailbone/spine/anything. Now I'm left with only a sore shoulder and a black-and-blue hip (it's pretty awesome...stop by the office and I'll show you) as opposed to a trip to the hospital (or a six-foot deep hole). So the thing I thought of there, on the pavement in a lightly falling snow, was that if Penny and I ever have kids, on their eighth birthday they get skateboards. Not that I want them to work their way up to the Boom Boom Huck Jam, but at some point, when they're in their early 30s out walking their dog, maybe it will save their life.
Thanks again, Steve.


The folks on the message boards for Steve Albini's studio loooooove the AMG.
We get a solid NOT CRAP! rating!!


What could be cuter than an iPod? Legos you say? How 'bout a little lego guy with an iPod?
Huh? Cute, huh?


Dear Abby,
My husband has a long record of money problems. He runs up huge credit card bills and at the end of the month, if I try to pay them off, he shouts at me, saying I am stealing his money. He says, "Pay the minimum and let our kids worry about the rest." but already we can hardly keep up with the
interest.

Also he has been so arrogant and abusive toward our neighbors that most of them no longer speak to us. The few that do are an odd bunch, to whom he has been giving a lot of expensive gifts, running up our bills even more. And he's gotten religious in a big way, although I don't quite understand it. One week he hangs out with Catholics and the next with people who say the Pope is the Anti-Christ.

And now he has been going to the gym an awful lot and is into wearing uniforms and cowboy outfits, and I hate to think what that means.

Finally the last straw. He's demanding that before anyone can be in the same room with him, they must sign a loyalty oath.

It's just so horribly creepy! Can you help?


Dear Lost:
Stop whining, Laura. You can divorce the jerk any time you want. The rest of us are stuck with him for four more years. 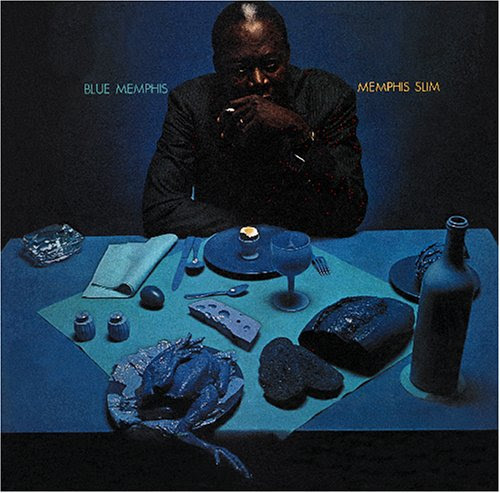 The scan doesn't really do it justice, but this Memphis Slim LP has a really sweet cover.
It's all blue (like The Blues, gettit?) except for this soft-boiled egg in the middle of the frame...

Steve-o, be on the look out for a t-shirt.


Ha! Right now I'm watching 60 Minutes and not only am I seeing Dave Feeny's goofy face playing pedal steel on this Loretta Lynn feature , but I can also see the Orange amp that Derek played through on the Porchsleeper record.

See the amp (and Dave, and the video for "Portland, Oregon") here


Thanks Earl
Thanks Paul
Thanks Mark
Thanks again Steve