Well, Danny rapped all night about his suicide,

BrianSleeper reporting on the launch of the Motor City Music Conference last night:

we ended up stopping by jacoby's after the paybacks show to steal beers from ryan and gary. so we get up there and kid rock is up there with his whole posse which included the hottest little russian girl i've ever seen and that ty stone guy that opened up for us at jacoby's that one time. well before too long, kid organizes some kind of 8 Mile-esque 'sing off' between ty and some drunk guy (not me, different drunk guy). they tried to sing a bunch of motown stuff that neither one of them seemed to know very well. pretty soon stirling is standing on a table with kid rock singing some hank jr. song. sometime after 3:30 the everybody stumbled out of the bar.


We're playing there Friday Night, and we've promised that we would play Mott The Hoople's "All the Young Dudes" with Stirling singing the lead and backing vocals by Great Lakes Myth Society.

Jesus Christ, people, if that doesn't have provide the festival's greatest possible opportunity for potential catastrophe or pure rock and roll shining awesomeness, I don't know what does.

Also - don't forget: on Saturday at 2:30 pm at the Cobo Center, I'm part of a panel discussion on Music and the innerweb (for some reason). I'll be up there with Ryan Sult (Motorcityrocks.com), Mark Graham (Whatevs.org), Rob Theakston (Team Dorkwave), and Sam Valenti IV (Ghostly International), and if nobody shows up we'll just end up playing Pictionary which sucks 'cause Grambo is so good at it he'll waste the rest of us.
Plus, MatRog hooked me up with a bunch of AMG CDs, books and magnets to hand out, so I'll be sure to win the coveted "Favorite Panelist" award.

'Member how a while ago a whole bunch of smart folks gathered together to bring back Coke Classic? Now one nitwit is trying to save Surge.
Let 'em have it back...theyll die out and it'll bring the collective gene pool up.

What's that?
Wear a Klingon uniform to a Civil War re-enactment? 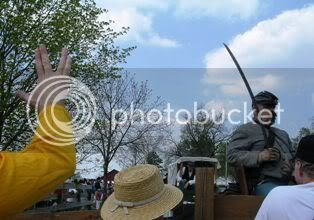 I realize he is doing a Vulcan hand gesture, but if you look at the pictures, he is clearly dressed as a Klingon.
Don't try to out-dork me, I eat pieces of shit like you for breakfast.

Ooh, Christ is this spooky. Some kid stole the Professor's laptop to try and get the final exam key off of it and got in a little deeper than he intended. he said this at a recent lecture, directed at the kid who took it (since they were tracking him down via the laptop's wireless card anyway):

"I'm not particularly concerned about the computer. But the thief, who thought he was only stealing an exam, is presently - we think - is probably still in possession of three kinds of data, any one of which can send this man, this young boy, actually, to federal prison. Not a good place for a young boy to be.

You are in possession of data from a hundred million dollar trial, sponsored by the NIH, for which I'm a consultant. This involves some of the largest companies on the planet, the NIH investigates these things through the FBI, they have been notified about this problem.

You are in possession of trade secrets from a Fortune 1000 biotech company, the largest one in the country, which I consult for. The Federal Trade Communication is very interested in this. Federal Marshals are the people who handle that.

You are in possession of proprietary data from a pre-public company planning an IPO. The Securities and Exchange Commission is very interested in this and I don't even know what branch of law enforcement they use."

C'mon, a Friday night with these guys practically guarantees a good time. 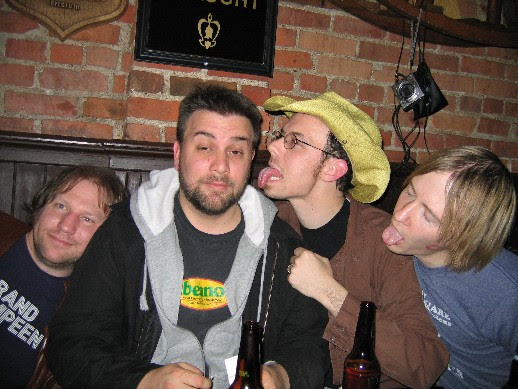 Stoney, Beano, the Gay Cowboy and The Kid