Maeve asks why this picture amuses her so... 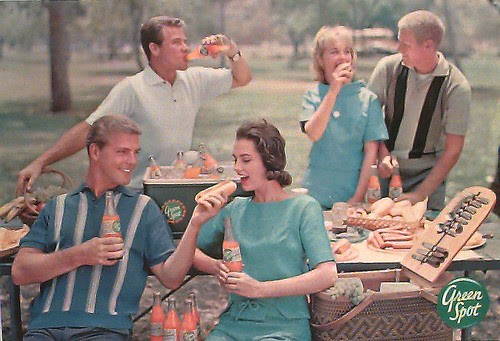 I imagine it's the lazy and lurid look of expectation on the woman's face.
She really wants that hot dog in her mouth, but isn't hurrying to get to it.

Either that or the startlingly white buck teeth of Chip sitting next to her.

Also there's this weird sexual dynamic in the whole group, three guys, two girls, two couples have obviously paired up,
and then there's the one guy deep throating his Shasta in the background going:
"Hey man, I'm cool with whatever...either way, what happens at the picnic stays at the picnic, bros!"

This guy scratches The Imperial March on turntables at a DJ battle.
DJ Nerdy Red-Haired Guy in the Hizzzouse!

Some other nerds stole a Dalek (Dr. Who stizz) sculpture from outside of a British national park and are now holding it for ransom.
The best part is that the area is called "Wookey Hole"

Here is The Picture of Everything.
Everything including The A-Team van, Salvador Dali paintings, and "A wild and crazy beach party with The Finks, Don Ameche, Wilford Brimley and various Groovy Teens."

Q, How many Republicans does it take to change a light bulb?

A. None. There is nothing wrong with the light bulb. It’s condition is quite satisfactory. It is making progress every day. Any claim that it lacks brightness is an attempt on the part of a liberal conspiracy to undermine American values. Why do you hate freedom?

Thanks Dadid
Thanks Jeremy
Thanks Katy
Thanks Miss Mapping
Thanks Lee