Mr. Scott? He's D.Y.K.
His remains will be shot into space, which is pretty fricking cool.

Attention! A feature on the Great Lakes Myth Society will air Wednesday at 4:50pm on Michigan Radio 91.7FM out of Ann Arbor. It will be featured on the program All Things Considered and then again Thursday morning at 7:50am on Morning Edition.
For those out of the listening area, you'll be able to stream the program at www.michiganradio.org.

Update: MP3 of the story is available Here.
Featuring a cameo from DataWhat Director of Parks and Recreations Ryan Sult.

The International Serenity Trailer is out now.
Plus: four selections from the soundtrack are up too, Jennifer.
I know I keep going on about this show, and I can guarantee some of you think about this show and think "Ug. Made-for-TV sci-fi is terrible." ...and you're right. 98.76453% of it is, but if you take the minute-and-fifty-one-seconds that it takes to watch this trailer, I think you'll get a glimpse of the wit and character interaction that sets Firefly apart.

P.S. Blogging about Sci-Fi is about as dorky as you can get.

Coldplay's latest album 'X&Y' has some colored blocks on its cover. The blocks are arranged in a code developed in 1874 by Emile Baudot, to be used by telegraphers transmitting messages across wires. The code uses visual representations of 1's and 0's in a 5 digit sequence corresponding with particular letters of the alphabet and typographic symbols. 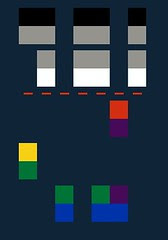 PERSONAL DAYS:
Each employee will receive 104 personal days a year. They are called Saturday and Sunday.

RESTROOM USE:
Entirely too much time is being spent in the restroom. There is now a strict 3 minute time limit in the stalls. At the end of 3 minutes, an alarm will sound, the toilet paper roll will retract, the stall door will open and a picture will be taken. After your second offense, your picture will be posted on the company bulletin board under the "Chronic Offender" category.

SURGERY:
As long as you are employed here, you need all your organs. You should not consider removing anything. We hired you intact. To have something removed will constitute a breach of employment.

Thank you for your loyalty to our company. We are here to provide a positive employment experience. Therefore, all questions, comments, concerns, complaints, frustrations, irritations, aggravations, insinuations, allegations, accusations, contemplation, and input should be directed elsewhere.

Have a nice week.

Go to http://moon.google.com/ then zoom in all the way on the moon.
Google=Clever.

Detroit-area drunk driving arrests for one weekend in May.
Fave: 2:20 a.m. May 12, Ford and Lotz: A woman is stopped for speeding in a 2002 Ford Taurus. She says she had a few beers after work. Half of a 12-pack of Bud Light is behind the driver's seat. Several empties are behind the passenger seat, and a half-full bottle is between the passenger seat and center console. She blows 0.12%. On the way to the police department, she says she has to urinate. At the station, she says, "Never mind. I just peed in your car. I couldn't hold it."

why you little stinker...

Thanks Lee
Thanks Aaron
Thanks Chicago Dave
Thanks PJ