the view from the deck right now 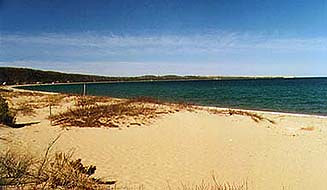 Pretty funny take on the whole Grand Theft Auto nudity "scandal" that Hillary Clinton has gotten her panties in a bunch about.
"What pisses me off more than anything is that I paid for a game rated for 17 year olds, or possibly 17 and 1/2 year olds, tops. What I got was a game rated for 18 year olds instead."

Blank00 has a new photoBlag: Stations.blagspot.com where he will post the photos he takes in NYC subway stations.
Noice!

The trailer for the Johnny Cash biopic Walk The Line is now online.
Joaquin Phoenix makes a pretty good Man In Black, and Reese Witherspoon is a cute-as-a-button June, but I dunno, the trailer didn't really wow me.

Speaking of cute-as-a-button, apparently Scarlett Johansson was dazzled by her Brontosaurus-sized boobs on a billboard in LA.
How is it possible that this news is on the ticker as far away as Bombay, but nobody on the Internerd has posted a photo of the billboard? Seriously! This was days ago! I'll just have to drown my tears in this slideshow.
Update: Here is what looks like a cameraphone photo of the billboard in L.A. 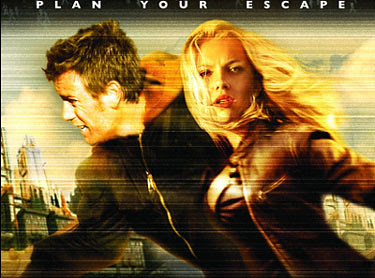 Is it just me? Or does it seem like ScoJo really cranked up the Boob Talk surrounding the release of this movie? First there's a huge press release for the fact that she didn't want to wear a cheap bra in one scene, then this whole "almost wrecked the car" item...I can't help but wonder if Michael Bay sat her down at some point and said, "Uh, look, Scarlett, we think this movie might really tank, is there any way you could talk about your boobs every six or seven seconds, just to try and keep some kind of hype going? Great, thanks."

Speaking of internerds, we have finally caved and created the Porchsleeper MySpace page.
Listen to tunes, become our friends, leave snarky comments, hopefully we can get Derek to do some blogging...it'll be the bee's knees.

Pretty funny: This guy dresses up as Darth Vader and scares the crap out of his wife at 2 in the morning.
Her final acknowledgement of his prank is the only proper way to respond.


This is kinda like "Cribs" at a Meth Lab.
"Hey, thanks for checking in. Stop by anytime, I’ll be up"

There was a pretty swell Mash-Up a couple months ago of Oasis, Green Day, Travis and I can't remember who else... Now scope out the video.
Kids with their technology...

Thanks Dan
Thanks Steve
Thanks David
Thanks Lee
Thanks Gerard