Terrifying thing of the day/lifetime:

These two sweeties are a pop duo called Prussian Blue
who extoll the virtues of white supremacy and preserving the Aryan Race.
Lyrics here. 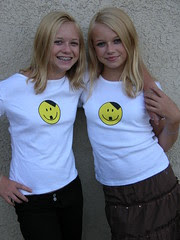 Once again, Matt Tobey wins the award for funniest line of the day:
“Funny. 'Brother for Sale' is the name of the Olsen twins first album.
It could also be the title of a record by Prussian Blue.”

The really nice thing is that there's a British blues-rock band also called Prussian Blue who have the name trademarked,
so hopefully they'll be able to bring these little nitwits down with a defamation of character suit or something.

Here are those 40 Best Magazine Covers I was talking about a couple days ago.
'Member? "That creepy picture of a nude John Lennon trying to cram his balls into Yoko's jeans pocket has been voted the greatest magazine cover of all time."

A massive collection of photos of sports streakers, nip slips, peckers falling out of soccer shorts, tennis underwear shots and pretty much every other embarassing sports moment available at SportsDignity.com
Warning, fellers: Weiners by the dozen.
Warning Ladies: The male penis is ugly and should not be looked at directly.

I've been trying to figure out how to carve my pumpkin this year in an effort to trump last year's Homestarrunner pumpkin (photo here) and I think I'm gonna try to do one of the Ha Ha Guy...y'know, the woodcut of the Quaker who says "Ha! Ha! I'm Using Teh Internets!!1!!LOL!"...I'll try to do him.
I'll let you know how it turns out

Here's a fun collection of one-star Amazon reviews of the greatest works of literature.

To Kill a Mockingbird (1960)
Author: Harper Lee
“I don’t see why this book is so fabulous. I would give it a zero. I find no point in writing a book about segregation, there’s no way of making it into an enjoyable book. And yes I am totally against segregation.”

Hey Maeve, when you get back from getting the Avian Flu, you can look at this Eurovision Song Contest 50th Anniversary website.
I couldn't find Tommy Seebach though, so I dunno how complete it could possibly be.

Wow, I never would think of the phrases "MTV's The Real World" and "Royal Oak" would be anywhere near each other, but there's rumors on the innernets.
Now if they got all four members of a beer-soaked busted heart rock band to live there, that would be some good televizzle entertainment. 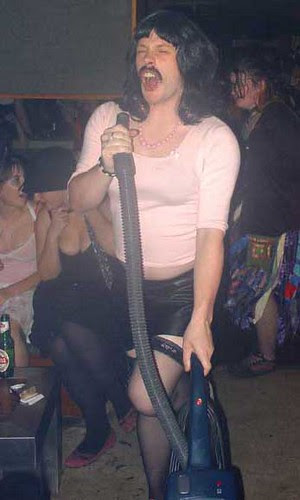 Thanks Rob
Thanks Metafilter
Thanks A.Warshaw
Thanks Double Viking
Thanks Matt
Thanks Dan