Moisture or no, suddenly we're the chumps.

Apparently This Image has the names of 75 bands in it. 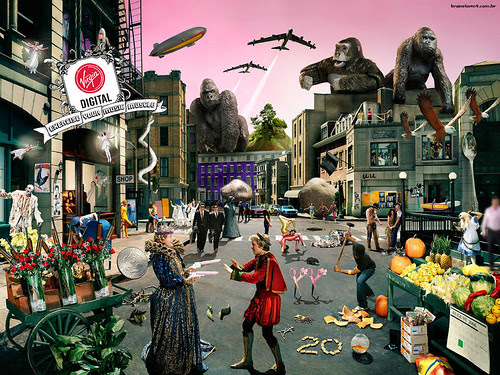 Funny memo from The Onion attributed to the CEO and President of The Gillette Company called "Fuck Everything, We're Doing Five Blades"
"Would someone tell me how this happened? We were the fucking vanguard of shaving in this country. The Gillette Mach3 was the razor to own. Then the other guy came out with a three-blade razor. Were we scared? Hell, no. Because we hit back with a little thing called the Mach3Turbo. That's three blades and an aloe strip. For moisture. But you know what happened next? Shut up, I'm telling you what happened—the bastards went to four blades. Now we're standing around with our cocks in our hands, selling three blades and a strip. Moisture or no, suddenly we're the chumps. Well, fuck it. We're going to five blades."

Yacht Rock 5
How Michael Jackson got his smooth back. Hint: Michael McDonald has something to do with it.

Matt Tobey goes another round with the Swedish Nike salesman (or robot, depending on who you ask).

Matt says:
word around the campfire is Nike's come out with a limited edition Brian Dennehy shoe.
what are the chances I could get my hands on about half a gross of those? just the left ones of course.

Hunter says:
your english is very good ,and my english is so poor ,so i can't catch your meaning

Matt says:
did you ever see the movie FX?

Matt says:
did you ever see the movie FX 2?

18 interesting medical tips and tricks you can use on your very own body.
If your hand falls asleep while you're driving or sitting in an odd position, rock your head from side to side. It'll painlessly banish your pins and needles in less than a minute. Thanks Mary Parkis
Thanks Double Viking
Thanks Matt
Thanks Fark