Porchsleeper & The Hard Lessons will all make out with each other onstage.

This video is life-changing. The Grabowskis?? Anyone?? I see Ditka, and some of the Village People(?) and some floozy with big cans... Is this a rap? Or an exercise video? And why are Mike Ditka's shoes on fire? Is he a motivational speaker?
What on planet Earth is going on?

At least this Riverdance version of The Legend of Zelda is Japanese, so I understand why I don't understand it.
But that Ditka thing, I just can't get my brain around it...

Careful, it's slick out there...

1. Coming home, I drove into the wrong house and collided with a tree I don't have.
2. The other car collided with mine without giving warning of its intention.
3. I thought my window was down, but I found out it was up when I put my head through it.
4. I collided with a stationary truck coming the other way.
5. A truck backed through my windshield into my wife's face.
6. A pedestrian hit me and went under my car.
7. The guy was all over the road, I had to swerve a number of times before I hit him.
8. I pulled away from the side of the road, glanced at my mother- in-law, and headed over the embankment.
9. I attempted to kill a fly, and I drove into a telephone pole.
10. I had been shopping for plants all day, and was on my way home. As I reached the intersection, a hedge sprang up obscuring my vision and I did not see the other car.
11. I had been driving for forty years, when I fell asleep at the wheel and had an accident.
12. I was on my way to the doctor with rear end trouble and my universal joint gave way, causing me to have an accident.
13. As I approached the intersection, a sign suddenly appeared in a place where no sign had ever appeared before. I was unable to stop in time to avoid the accident.
14. To avoid hitting the bumper of the car in front, I struck the pedestrian.
15. My car was legally parked as it backed into the other vehicle.
16. An invisible car come out of nowhere, struck my car and vanished.
17. I told the police that I was not injured, but on removing my hat, found that I had a fractured skull.
18. I was sure the old fellow would never make it to the other side of the road when I struck him.
19. The pedestrian had no idea which direction to run, so I ran over him.
20. I saw a slow-moving, sad-faced old gentleman as he bounced off the hood of my car.
21. In indirect cause of the accident was a little guy in a small car with a big mouth.
22. I was thrown from the car as it left the road. I was later found in a ditch by some stray dogs.
23. The telephone pole was approaching. I was attempting to swerve out of its way when it struck my front end.

Outstanding Optical Illusion.
While I was looking at it, I totally made the Spicoli-esque observation of "WHOA!"

First of all, This is what Tonya Harding looks like now.

Secondly, her official website contains 60 pages of fantasies that fans have written about her.

Finally, the site contains one lonely page of rejected fantasies.

Once there was a boy who lived at the foot of a very large? scary mountain. It was called Tonya Harding Mountain and it was haunted. One day the boy asked his mom if he could go up there. She said "Okay." So he went up there. Then he began to get afraid. And he wished he didn?t go up there but now he was lost and he couldn?t get down from there. Then Tanya Harding started chasing him and she tried to eat him. But he was too quick for her. Then he got home and his mom asked what happened and he told her all about it. And how do I know?
I WAS THAT LITTLE BOY.

There are a bunch of other gems in there, some with comments by the webmaster.

'Member that page with all of the bands hidden in the picture? 'Member? Here are all of the answers.
Ohhhhh, Sex Pistols. I get it. 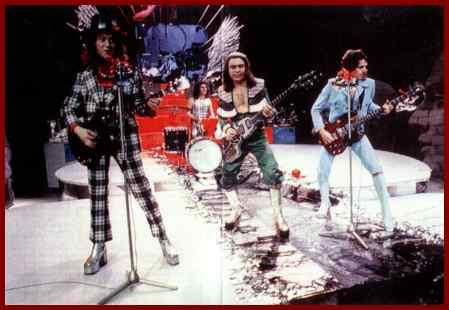 This is what we'll be wearing Friday