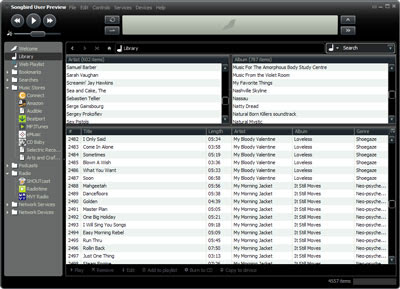 Songbird is a new Open-Source media player that is being called "The iTunes Killer" and "Firefox for Music"...I dunno if either of these are true, but it has the potential to be cool. The overall neat concept about it is that it is pretty much a shell that could be open to "Extensions" in the same way that Mozilla's Firefox browser is.

Imagine a dude savvy enough to write a little bit of code that could go through your digital music collection and look up your songs based on artist and title, then return other free MP3s you might like based on a Google Search of the artist's web page...or a function that could look through all of the track times of your digital files and recommend a playlist that would fit exactly on a 74 minute CDR. OK, these are both borderline retarded, and I dunno why anyone would want a random playlist of songs just because it would be 74 minutes exactly, but the fact that somebody could potentially do that and make it a part of the application is pretty cool.

What about an extension that if you right-clicked on a track, it would do an artist or album lookup at AllMusic.com... you're on a particular jam and you wonder "Hmmm...I wonder if Lee "Scratch" Perry is still alive" so you right click on the track and a "Check AMG" function does a search for his name and brings it up in the browser window? Think about the Firefox extensions that are out there...imagine managing and exploring your music collection with those.

One cool thing is that the whole window can become a browser window, so you can surf the web inside the application, and if you stumble across a website with some MP3s linked to it, they display like a mini-library at the bottom: 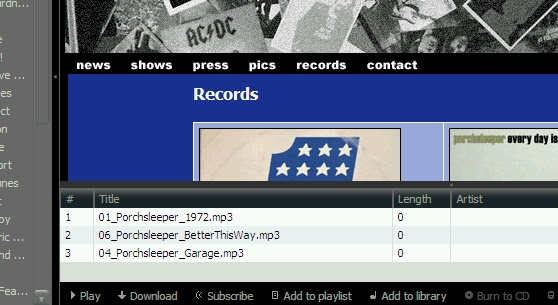 click for more complete view
Another terrific feature of the company (cheekily named "The Pioneers of the Inevitable") is the friendly manner in which they've communicated with their audience. The whole team has blogs where they talk in depth about the development schedule and actually reply to their potential users' questions.

Plus, look how cool their little farting bird logo is!

The version that is out now is a release called the 0.1 Preview, so I guess it's not even a beta at this point. There are some bugs that I can't help whining about:

It certainly isn't reading all of the ID3 tags. Only Artist, Album, Track, Genre and Track Time are available, and if you dig deeper, you cet some crazy junk like "Producer" and a "Media UUID" which looks like this: {ce237669-27d2-4730-887e-76c8c2ec3698}. Anybody? Unique identifier? ISRC code? Either way, it's not displaying my Comments, which is very, very important to me.

Year is available as a field: Yay!!! But every year says Zero: Boo!!!!

You can't remove things from the left sidebar. I may be in the music nerd minority, but I never, ever go to Pitchfork.com. Therefore I'd like to remove it from that list, but I am thwarted. I've seen notes saying that will be available in the next release.

Sometimes you can't stop the song that's playing. Hitting the Pause button does a whole lot of nothing.

It is not reading my M4A files (ripped in iTunes, but not from the iTunes store) correctly: 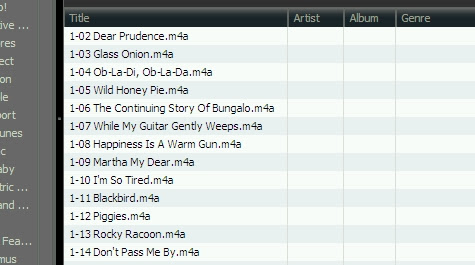 I'm pretty sure those are Beatles songs, and they look groovy in iTunes and WinAmp, so where are my Artist, Album and Genre fields? More importantly, it won't play any of my (non DRM'd?) M4A files. It displays 'em just fine, but no sound comes out when you try to play one of 'em.

The alternate skin is this eye-gouging red color (but, to each his own...)

Trying to re-size the columns is really weird...they don't slide along in tandem, they move completely independently so you have to re-size each one one at a time, then re-re-size all the ones you just screwed up.

She don' work on the Mac. Not a problem for me, but y'know, some people will have their panties in a bunch fer sure.

All gripes aside, it's gonna be pretty exciting once all of the kinks get ironed out and people start hot-rodding this mother.

Chris over at ToshiStation comes up with this astute Lost observation:

"That manuscript Mr. Hurley was reading round the campfire last night? The complete dorks astute will note that the author's name 'Gary Troup' is an anagram for 'purgatory' "

"I also thought it was interesting that Locke was holding a copy of 'An Occurrence at Owl Creek Bridge', the ultimate it-was-all-a-dream story." 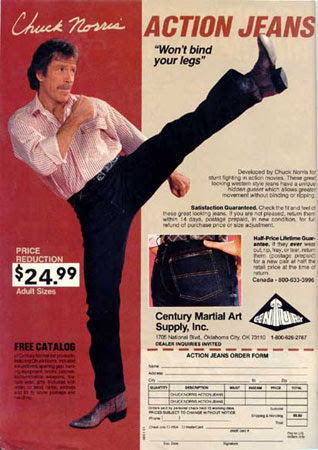 Thanks Matt
Thanks Chris
Thanks Dan
Thanks Double Viking