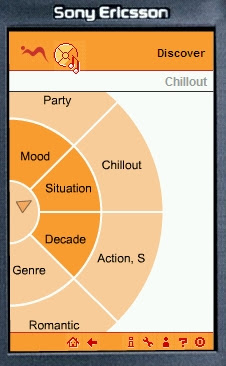 Looks like you can subscribe(?) to this service and get a stream of music.
The really nice part about it is the flash demo and the ability to select music by Mood or Situation.
That is a great idea.
Check out the demo...it's a fun toy. 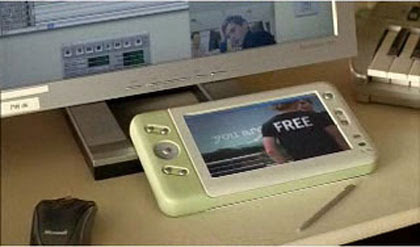 Looks like a tablet PC with a touchscreen...kinda like a laptop without the keyboard. Dunno how revolutionary it is, but the demo is pretty sharp.

Kittenpants unearthed these horrible horrible commercials for a dietary suppliment called AYDS.
As in "With AYDS I ate less, so the weight came off."

Can you imagine working for that company in the early '80s? I'm seeing a crowded boardroom with one white-haired guy saying "Folks I've been told we should tune into this televised news conference" so they click around on the VHF dial and hear C. Everett Koop talking about Acquired Immune Deficiency Syndrome, and the whole company going "Well...Crap." and then going out for drinks.
"AYDS helped me get back into a size 12!" hoo boy.

Nice photo of Hermione Grainger drinking a Corona.
...or what looks like "pretending to drink a Corona in a humorous fashion."

Funny news blooper where this news anchor means to say that a mountain climber is blind, but says something very different.
Uh...he's blind not deaf y'know.

How Kim Deal joined the Pixies:

Deal got married and moved to Boston. "I'd lived in Boston for one week and I got this paper called the Boston Phoenix that had ads in the back. A lot of them are, like, 'Bring your chops [talent], must have own van.' Which means, basically, they're looking for someone with a van, because they don't have their own transportation." But one ad caught her eye. "It said: 'Looking for female bassist, high harmony, must like Hüsker Dü, Peter Paul & Mary, no chops.' I thought it was really cool. And I called the people. I'd never done this before. Or since. And I found out from Joe on this tour I was the only one who actually answered that ad."

I love the fact that in this BoingBoing post they need to point out that the image is a Helen Frankenthaler painting, not chewing gum. 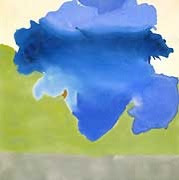 Please do yourself a favor and download Jenny Lewis' album "Rabbit Fur Coat" for free.
One of this year's best releases. For free. From the label. Legally. Encourage This Kind Of Activity People!

Thanks Dan
Thanks Rob
Thanks Matt
Thanks Steve
Thanks Thighmaster