Wayne Kramer/Porchsleeper
This Thursday at the god-damned Magic Stick.
How 'bout that? 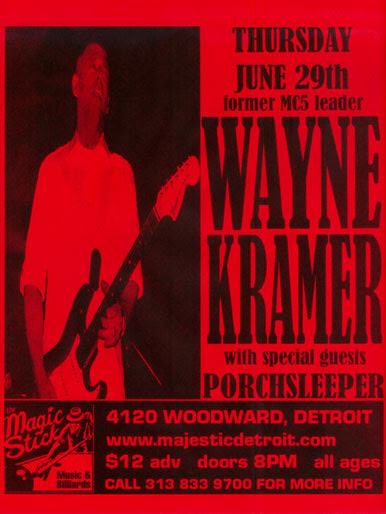 Featuring the 'Sleeper debut of Gary Rasmussen on lead bass.

So there's some congressman (does "congressman" need to be capitalized?) trying to pass some legislation on how the 10 Commandments should be posted in a government building, and Steven Colbert quizzes him, asking him to name the 10 Commandments (y'know, the important thing that he's legislating so hard for).
Spoiler: He doesn't get all of them.

Is the hit show Lost just a re-hashing of some show I've never heard of called Earth 2? Compelling evidence says "Maybe"
Man, this is like one of those Lincoln/Kennedy things.

Movie about Todd Osborn's Lego sculpture.
Featurd in a car magazine, of course.

This is pretty interesting: By putting http://gabbly.com/ in front of any website, it creates a little chatroom that opens where you can talk about that site...Like an automatic chat function. Try this one: http://gabbly.com/datawhat.com.
I am number 247! Feel My Wrath!

Can't catch a break in tha D: Detroit has the worst air quality of 100 major cities, scoring an "F" in Men's Health Magazine.
"Yes, that's right, worse than Los Angeles (No. 76, with D-plus) where smog acts as a natural barrier between neighborhoods. And even worse than Newark, N.J. (No. 75, D-plus), home to an odor that makes you wonder whether your car, and all the cars behind you, are on fire."

Trailer for this documentary about Firefly fans looks fun.
Nerdy, but fun.

Brilliant re-engineering of G.Dub singing "Sunday Bloody Sunday" by U2.
I have this vision of the guy who made the video really needing one more word like "Reality" or "Immune" or "Bodies strewn" or something, and just sitting on the edge of his couch in front of televised press conferences with his Tivo, just hoping that he'll say that word. Muttering "C'mon 'bodies strewn'...give me 'bodies strewn'...you know you want to say it George, c'mon c'mon c'mon."

I am way into the new album by Keane "Under the Iron Sea"
and if the internet isn't lying to me (and if you sign in to Napster),
you should be able to listen to it for free right here:

Under The Iron Sea