I can't believe how sad I am right now. 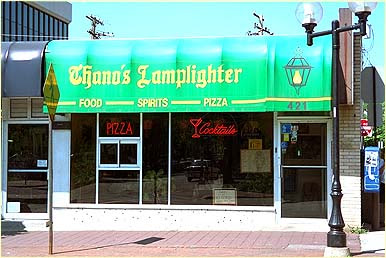 Man oh man...that hits me like a ton of bricks. I love that place...I think they had the best pizza in town.

Man, I had been going there since I was a kid...you'd always see cops in there 'cause I guess Thano would give 'em meals for free (or cheap anyway). I asked my Dad why he did that and he indicated that Thanos would never get robbed since there was usually a cop or two in the kitchen talking with the cooks and eating big plates of pasta.

I think it was more than that though...I think Thano really had a feel for a community, and wanting to be part of a neighborhood. You'd always see him hanging out in the restaurant at one of the back tables, talking to the cops or the basketball players, or just the regulars. Being a shop owner and saying hi to his neighbors, just like in the old days. It's funny, I don't see the owner of the American Apparel shop down the street doing the same thing. I wonder if the more upscale McKinley Towne Center going in next door has anyting to do with the closing.

There was a time when we would go every Friday, get a half-tray Sicillian deep dish and a plate of fries...soooo good. Any time the waitress would ask how it was we'd say "It was the best pizza ever."

That goofy Bouzouki music that would always be playing reminded me of the Cheese Shop sketch by Monty Python.

That one time that John Bush and Jonathan Ball ordered Greek Coffee but whoever made it put salt in it instead of sugar.

Lee always getting the grilled cheese or the Pizza margarita (fresh mozzarella, fresh tomatoes & fresh basil w/ tomato sauce) back when he was a vegetarian.

When Kid Rock and Tara Reid were in Ann Arbor the little college waitress knew all 'bout it.

Donn Stroud watching that waitress pour two drinks from two pitchers at the same time and saying "Whoa...Double" in an astounded voice.

Watching guys go into Encore with crates of records to sell...then coming back out of Encore with the same records.

That one time we couldn't figure out why the pizza tasted so weird and it was because the Parmesean cheese was beyond funky. 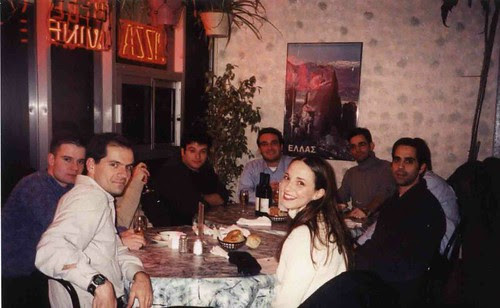 The cheap posters of Greece on the walls.
The weird walk-up window pass-thru that only got used to shout at your friends as they walked by.

Those awesome round tables that could fold up to become square.

The little silver bowl of Grandma mints at the front desk.

The photos of Jesse White and Jimmy Stewart behind the counter.

The hourglass-shaped drinking glasses that would always hold all of the ice at the bottom until you tapped it and then the ice would come down and hit your face like tears.

Not to get double cheesy or anything, but I had actually planned on taking my son there. A big slice of cheesy deep dish pizza with pepperoni and onions. I'd show him how to cut it on the big tray, and hold one end of the pan with a napkin so your fingers didn't get burned. Guess that's not going to happen...at least not at Thanos. 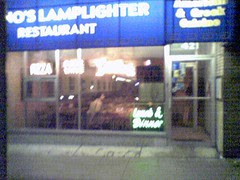