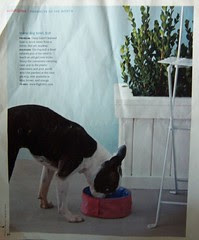 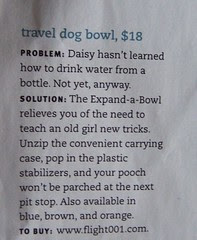 We have a Boston Terrier, her name is Daisy.
That's what I'm on about...

I started watching This video thinking it was going to be another "oh, aren't the things on Japanese TV strange?" kind of clips, but at about a minute in, it took a turn so strange that I never woulda saw it coming.
See there's this ballet dancer, and a guy watching her on TV, but then when he gets to the TV studio...aw, you really gotta see it to really wallow in the puzzlement.

Meryl Streep introduces Joss Whedon at this Equality Now event where he goes on to discuss why he writes such powerful female characters. By the end of it, you may want to vote Whedon for President.
Seriously. That geek knows how to write a speech.

HotCaptcha is liek one of those things where you need to type in the smooshed-up letters to verify that you are not a robot, but this one involves identifying three hot girls (or Dudes if that's your thing) instead of typing in numbers.
There was one where you identify Kittens but that seems to be down.

It looks to me like a waveform analysis/machine listening algorithm, but I'm not sure. Basically in their demo you can use sliders up and down between things like "Silent" and "Ear-Busting" or "Male" and "Female" vocals and get some results back. A lot of the music is either in German or at least European, so I'm having a tough time with evaluating it, but it is fun to play around with.

Thanks PJ
Thanks Waxy.org
Thanks Christy
Thanks Alec