EVERYTHING YOU CREATE IS CANCER AND MADNESS

Hoo lordy.
This Powerthirst movie made me want to kick Mother Nature in the face with my ENERGY LEGS!!!!

YouTube video of a Catwalk. For real.
Kind of like Zoolander meets Guitar Hero. At the end it says that it was filmed by two people. It was just a stationary camera pointed at a treadmill...why did that require two people?

Some interesting (but not earth-shattering) early Bill Watterson comics.
Not much Calvin or Hobbes in his college days. 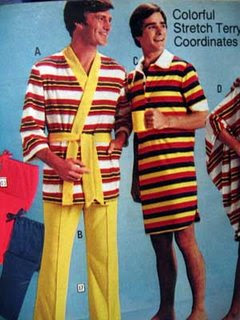 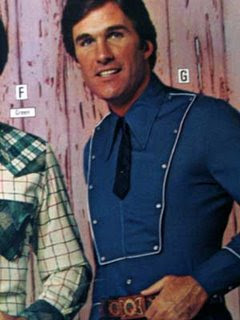 From a mind-bending collection of JC Penney catalog from 1977

Anybody in a band should appreciate this list of worst gigs. A favorite:

I don't even want to talk about Vincent Van Go Go's in Mobile, Alabama.

someone else says: "Hey, I'm originally from Mobile. I'd like to hear your Vincent Van Go Go's experience."

Well, um. We played at Vincent's several times. I don't know if there was a worst.

We showed up there once and there was no PA. Actually, there was nobody when we first got there. Club was locked, no signs of life, even though we were late.

An hour later the owner's girlfriend showed up. She let us in, then started opening the bar. BUT, she was barefoot. There was a broken glass behind the bar. Apparently, she nearly cut her toe off. She gasped, wrapped none-too-clean looking bar towel around it and said "I'M GOING TO THE EMERGENCY ROOM... SOMEONE WILL BE HERE SOON!" and left us alone in the club.

Some time later the soundman wandered in. He was sort of wandering around in an "I just woke up" like daze when one of the guitar players in my band said "Stubber (his actual name, btw), there's no PA up here."

This, somehow, was a revelation to him. Astonished, he looked up and noticed that it was true. There was no reinforcement in the room at all.

"Um. Yeah. Well. I better go do something about that," he said, and he left. Again, we were alone in the club. We went upstairs to the dressing room and glumly waited as "showtime" approached.

At nine thirty or so, the owner of the club ("Bubba") walked in, walked right past us and locked himself in his office without speaking to us.

At ten, Stubber returned with a large bag of ice and the owner's girlfriend, but no PA. When asked about the PA, he said "Oh, yeah. I guess I better call someone."

This sort of stuff used to make me SO ANGRY, just because fuck, I mean, I loved touring in a rock band, but when showtime is an hour away, there's no PA, not a single customer has darkened the door of this shithole bar, and the owner is locked in his office with his nose pressed to a mirror, I begin to suspect that my time is being wasted. I could be home, y'know. Home is not a bad place if you're not going to get paid anyway.

A pair of crap speakers and two microphones turn up eventually, and we play half a song for a soundcheck.

Eventually, six people can be seen at the bar, half a mile from the stage, but when we finally come out to play, no one even looks up from their drinks. We play half a set. No response of ANY KIND from the bar. Mostly, we surmise, they're waiting for drugs to arrive.

We stop beating on each other's guitars and peer into the dark. Still no reaction from the half dozen people at the bar. We admit defeat. We pack it in, load the van, and someone goes to speak with the owner of the club.

Apparently, drugs had finally arrived, because SUDDENLY he is a glowing, joke-telling, wide-eyed, giddy mess. He comes POURING out of the side door on Dauphin Street. He talks a mile a minute about WHAT AN AMAZING SHOW that was. He pays us $600. ($100 per paying customer in the bar.) He slaps us all on the back. He invites us to stay there all night and party.

We politely decline and head for Pensacola, where we have friends, soul food, and a nice place to sleep.

Fuck that bar. I hated that place.

Joe Mathlete has issues with Marmaduke

THERE IS NO HOPPING INVOLVED

BRAD ANDERSON WHAT IS WRONG WITH YOU

WHY DO YOU KEEP DOING THIS

EVERYTHING YOU CREATE IS CANCER AND MADNESS

HOW ARE YOU STILL ALIVE