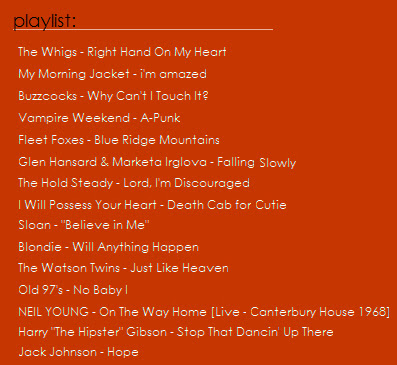 Complete playlist available for your listening pleasure here:
Click on the first song and select "Play"
A couple of notes regarding this list:

This is not "The Best Songs of 2008" (although many of them are), it is a list of songs that will remind me of this year.

It is not in "Favorite" order.

If you listen to the playlist at the link, it is meant to be listened to in that order. I'm an "Album" kind of guy in that way.

The Whigs - "Right Hand On My Heart"
Raw and stomping. A great way to kick it off.

My Morning Jacket - "I'm Amazed"
Far and away my favorite song on my favorite album of 2008.

The Buzzcocks - "Why Can't I Touch It?"
I heard this on WCBN for the first time this summer (I know...30 years late. So sue me) and the melody ran through my head for the rest of the year.

Vampire Weekend - "A-Punk"
Who gave these goofy college kids the right to make one of the most refreshing World Music punk albums of the year?

Fleet Foxes - "Blue Ridge Mountains"
I didn't lock into these guys until I watched this Take Away Show where they performed this song acoustically. Quite nice.

Glen Hansard & Marketa Irglova - "Falling Slowly"
Hey, this is that song from the one movie, right?

The Hold Steady - "Lord, I'm Discouraged"
I unfortunately thought this album was a little mediocre. Blah production and the brilliant Craig Finn seems to be cranking out his own Mad Libs (fill in "River" + "Mall" + "Minneapolis" + Girl's name" + "Drug reference" = Hold Steady record), but this slow brooding waltz crashes around just right.

Death Cab for Cutie - "I Will Possess Your Heart"
I like the fact that the intro is so long and wallpapery that after a while you forget that any music is playing until Ben Gibbard starts singing.

Sloan - "Believe in Me"
An average Sloan album with a handful of really solid pop songs. This is one of them.

Blondie - "Will Anything Happen?"
Every once in a while a song from "Parallel Lines" will jump out at me as being totally fresh and of the moment.

The Watson Twins - "Just Like Heaven"
The angelic twins who backed up Jenny Lewis' solo debut did their own album with this swoony Cure cover on it.

Neil Young - "On The Way Home [Live - Canterbury House 1968]"
This is on a live recording from a 1968 Ann Arbor concert that was released this year. Both of my parents were at this show. Totally weird, right?

Harry "The Hipster" Gibson - "Stop That Dancin' Up There"
Hilarious nonsense wordplay from the mid-40s. My kid is totally into this track.

Jack Johnson - "Hope"
Wow. Who expects to like a Jack Johnson album? Certainly not me. It is not at all challenging or adventurous, but kinda like a big fruity drink with umbrellas when you're on vacation, it goes down easy and makes you feel foolish and smiley.

So I'm working on this list and I figure that with the power of the intarwebs I'd be able to find the songs, put them in an embedded widget for the world to enjoy.

What a convoluted mess.

I thought I was having the most success with iMeem, but as it turns out if you want someone else to listen to a playlist, either that person has to sign up with iMeem (which I don't want to ask people to do) or they get 30 second samples of some of the songs (which is drag city).

iMeem did have all of the songs I was interested in except one.

Seeqpod failed on a bunch of the songs (which surprises me).

iLike totally crapped out on a bunch of the songs.

Project Playlist was missing a bunch of songs.

Mixwit is on its way out, so I didn't even bother, and Muxtape...don't get me started.

Songza -- harnessing the power of iMeem and the YouTubes -- was the only one able to handle my requests...and guess what? NO EMBED ON YOUR BLOG FEATURE!

There is no magic bullet. Thanks web 2.0